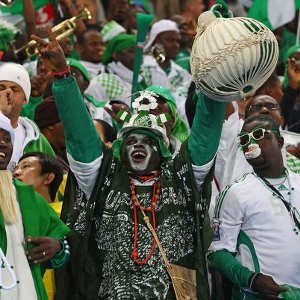 It is glaringly true that Nigeria narrowly missed out on the most desired award, the CAF African Footballer of the Year Award which was taken away by the Ivorian and Manchester City’s Yaya Toure, Nigeria nonetheless dominated the award night at the 2013 Glo CAF Awards which took place at Eko Hotel and suites in Lagos.

Infact Nigeria was the talk of the award night all the way at the 2013 Glo CAF Award as the nation grabbed six out of the eleven CAF categories in the popular and important football awards.

The first to open the door for Nigerian numerous awards that night in Lagos was Keshi who grabbed the award of Coach of the year, due to his popular and giant achievements with the Nigerian national team, the most pronounced of his coaching achievements is the victory at the triumph at the Africa Cup of Nations in South Africa.

Another thrilling award that followed suit was the Nigerian youngster, Kelechi Iheanacho who received the award of Africa’s Most Promising Talent ahead of the other two talented young footballers that were nominated from Ghana and Egypt.

The Nigeria Supporters were not left out of remarkable recognition as they bagged the CAF Fair Play Award while the Super Eagles defeated Ethiopia and Burkina Faso to the National Team of the Year Award.

The Youth National team of the year Award went to the indisputable winner of the FIFA U-17 World Cup, the Nigeria’s U-17 team.

Even an Honorary Award was also presented to Nigerian president Goodluck Jonathan,the Minister of Sports, Bolaji Abdullahi received the award on behalf of the president.

This summary of the Nigerian CAF 6 awards are as follows.

Coach of the Year————– Stephen Keshi

Youth National Team of the year— Nigeria U-17, winner of FIFA U-17 World Cup

Manchester City Moves To The BPL Summit But For How Long?