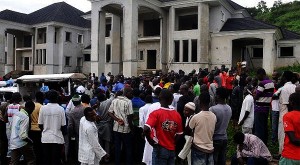 Victims of the Sept. 20 Apo killing in Abuja have demanded for N500 million in compensation from the Federal Government.

Chidi Odinkalu, the Chairman, Governing Board of National Human Rights Commission, made this known on Wednesday at the public hearing organised by the commission.

Odinkalu said the demand was made by National Commercial Tricycle and Motorcycle Owners and Riders Association of Nigeria on behalf of the victims in the course of the commission’s investigation.

The chairman sought to know from the State Security Service if it was ready to pay compensation to victims.

He, however, said that it would depend on the verification that victims were innocent and that they were hit by bullet from security operatives.

“We need to first ascertain and determine whether those people who were killed were actually innocent individuals. That is the first step.

“Until you reach that conclusion, you cannot be talking about compensation or damages, and on the very day of the operation even after the shooting was over we did make some arrests.

“So, it is difficult for anybody to be conclusive until a thorough investigation is carried out.

“It is also necessary to ascertain the culpability of the individuals that died at the incident to determine their link to Suleiman, who is at large,” he said.

He said it was difficult to ascertain if victims were innocent, given the manner in which they were buried.

He also said the institution would only take responsibility when it could be ascertained that victims were killed by bullet from security operatives.

“We came under fire and we responded, when you start talking about compensation, you have to ascertain whether the victims fell under the fire of security operatives or under the fire of Boko Haram members,’’ he said.

He said that security operatives’ action was in defence of national security, which takes precedence over individual right.

“The Supreme Court has said very clearly that national security of a country takes precedence over individual human right.

“Where the national security of a nation is under threat, individual right is secondary,” he said.

The Defence Headquarter on its part presented evidences to the commission in the form of an album, which captured the activities of the Brigade in the defence of national security.

The evidence was presented to the panel on behalf of the Commander of Brigade of Guards, Maj.- Gen. Emmanuel Atewe, by Assistant Director, Legal Department, Godwin Anyalemechi.

He said the evidence was to show their level of professionalism, modus operandi, adding that what happened on Sept. 20 was an exception.

“In compliance with the promise made by my commander we have an album that captures the activities of the Brigade, which include the arrest made, causalities, equipment recovered and suspects,” he said.

Testifying at the public hearing, Chief of Garki, (Sa’peyi Garki) Usman Ngakupi said 30 rounds of ammunition was handed over to him by one of the auto rick shaw (Keke NAPEP) rider on the day of the incident.

He said he immediately called the DPO Garki Division and informed him of the incidence after he visited the venue on the said day to calm the angry youth that wanted to protest.

He said he witnessed the evacuation of seven corpses from the venue of the incident to Asokoro General Hospital by the police.

Ngakupi prayed for peace, adding that security was everybody’s concern.

The commission adjourned hearing to a later date, to be communicated to stakeholders.

Stella Oduah Yet To React To Questions About Her Academic Qualifications