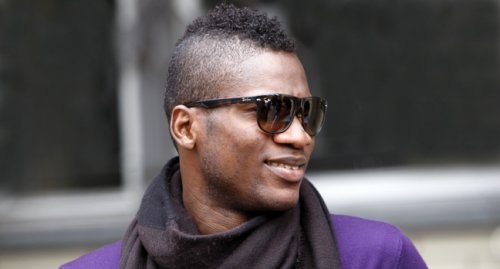 Super Eagles striker Brown Ideye has paid a surprise visit to his home-based colleagues in their Port Harcourt camp.

The Dynamo Kyiv forward arrived at the team’s camp before dinner on Saturday, and exchanged pleasantries with his teammates, many of whom he had not seen since Nigeria’s friendly game against Italy.

He went on to encourage his teammates who are set to represent Nigeria in the African Nations Championship next year.

“My mates will do well at the CHAN tourney because we have a good team and a very good technical crew backed by a performing NFF,” Ideye said.

Ideye assured the coaching crew of his fitness despite the holidays. He reassured everyone that he has been keeping fit for the start of the new Ukrainian season and the preparation for the World Cup.

Ideye jokingly told Coach Stephen Keshi to get ready for a selection-headache as regards some home based players breaking into the World cup squad. He is also okay with welcoming new invitees

“Sir, they are all welcome, the more the merrier,” an obviously excited Ideye told Stephen Keshi.