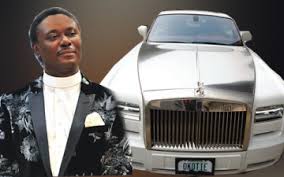 The Pastor of the Household of God Church International, Chris Okotie, recently bought a Rolls Royce Coupe, the 2014 Bespoke Edition, to mark his 30 years as born-again Christian and 27 years as a pastor, SUNDAY PUNCH learnt on Saturday.

According Okotie’s close aide, the pastor spent N120m on the luxury car and had earlier spent N33m on a Range Rover Autobiography to mark a milestone of his church.

The source, in a text message, said, “Pastor Okotie just bought a Rolls Royce Coupe, 2014 Bespoke Edition at N120m to mark his 30 years as a born-again Christian and 27 years as a pastor. He had earlier bought a Range Rover (Autobiography) 2014 Model for N33m, reputed to be the costliest SUV in the world to mark this ministry’s milestone.”

Checks on the Internet showed that the cheapest price of same Rolls Royce model is about N65m, but it could be more expensive if armoured.

Fifty-five-year-old Okotie was in the news recently for the controversial comments he made during a church service in which he claimed that “all Catholics will go to hell,” and referred to Pope Francis as anti-Christ.

You Are Inciting Nigerians Against Me: President Goodluck Jonathan Writes Chief Olusegun Obasanjo.

People With HIV Can Live As Long As Uninfected Populations – Report