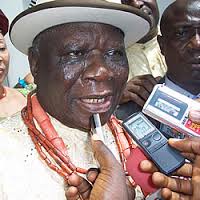 Speaking Thursday in London, the Niger Delta leader urged President Jonathan to reply Obasanjo’s letter because of the fundamental issues raised and to satisfy Nigerians.

Clark said Obasanjo always wants to remain relevant. He does not want anybody to be above him”, he said, alleging that the former president got whatever he wanted from Jonathan but is still not satisfied.

The former Information Minister added that, “All appointments of the west came from him. His family members, whatever he wanted, he got”, lamenting that the former president is well known for his habit of undue criticism and character assassination against past Nigerian leaders.

On allegations of corruption leveled against the Jonathan government, Chief Clark said no one is more corrupt than Obasanjo, pointing out that when he was released from prison, he had only N20,000 but is now worth billions of Naira.
“Obasanjo is the reason why why Jonathan is being accused of not doing enough to eradicate corruption. He does not want to disgrace him. Otherwise Obasanjo is very, very corrupt. Everybody knows that”, he said.

On the allegation that the presidency is training snipers against Jonathan’s political enemies in 2015, Clark said Obasanjo was telling lies because the president made it clear to all that he did not want any one killed because of his election in 2011.

He urged security agencies to investigate the allegations and if found to be true, necessary action should be taken because nobody is above the law. He advised President Jonathan to remain firm and stand tall as the president of Nigeria, and follow his policies.