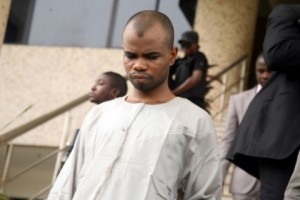 A Federal High Court sitting in Abuja Friday sentenced one of the top leaders of the radical islamic sect Boko Haram to life imprisonment.

The court found the bomber guilty over the incident which left 44 people dead happened at when a car packed with explosives rammed into the gates of the church.

Kabiru was also found guilty of planning to bomb the Police Headquarters in Sokoto State.

Aside the allegation that he trained over 500 men on how to manufacture and detonate improvised explosive devices (IEDs), the Federal Government said that he had prior knowledge that the sect planned to bomb the church on Christmas day but failed to disclose it to any law enforcement officer as soon as reasonably practicable.

He was said to have between 2007 and 2012, at Mabira Sokoto, Sokoto State, facilitated the commission of terrorist acts, including planting bombs at Police Headquarters and some government organisations in the state.

Though he was previously arrested by the Police in Abuja on January 14, 2012, he was, however, declared missing two days later.

Edwin Clark Says Obasanjo Had Only N20,000 When He Was Realeased From Prison, Now Worth Billions