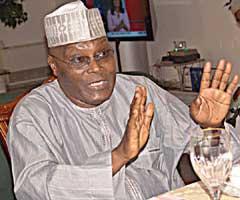 Former Vice President Atiku Abubakar seeks to pitch tent with the All Progressives Congress away from the ruling People’s Democratic Party for the second time after he left the ruling party for Action Congress (AC) in 2007.

Atiku along with seven PDP governors of which five are now with the APC staged a walk out of the National Convention by the Party at the eagle square Abuja. The aggrieved members then formed the nPDP group at the Yar’adua Center speaking out against the leadership style of the party.

The former Vice President will be hosting the leadership of the All Progressives Congress (APC), including former head of state, General Mohammadu Buhari, former Lagos State governor, Senator Bola Ahmed Tinubu and governors of the party, at his Abuja residence.

The meeting sources say is to formally announce his defection from the PDP but Atiku’s Media aide, Garba Shehu confirmed his principal’s meeting with the leadership of the opposition party, but declined to comment on whether or not the former vice president would declare for the APC today.

Atiku would make a formal pronouncement after his parley with the APC leadership, a source confided in LEADERSHIP that Atiku’s move to join the party was encouraged by the successful merger of the APC and the Abubakar Kawu Baraje-led factional leadership of the PDP.

“His mind and soul are all here because Turaki, as we all know him, is a progressive to the core. That is why his ideals and those of the leadership of the PDP have always conflicted.

“So the nation, not only the APC, will benefit if he finally makes up his mind to join; and I am sure after our meeting today, the polity will witness another lap of a political race,” the source said.