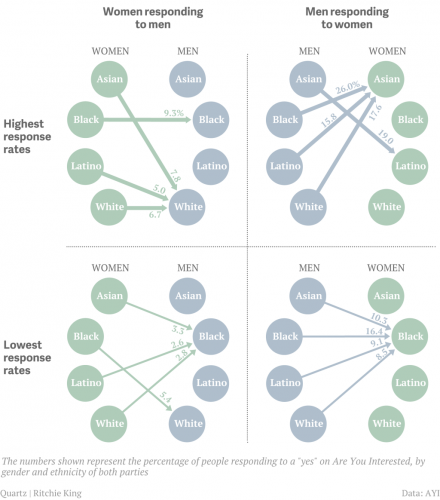 Quartz, a business and marketing website, recently released data on the Facebook dating app Are you Interested (AYI), which connects singles within the confines of their direct and indirect Facebook networks. Quartz’ data are based on a series of yes or no questions about who users are interested in, as well as response rates between users, once notified of a potential suitor. The data show that white men and Asian women receive the most interest, whereas black men and women receive the least amount of interest (see headline photo for the complex picture of racial preference by gender). The writers at Quartz summarize the findings as follows:

Unfortunately the data reveal winners and losers. All men except Asians preferred Asian women, while all except black women preferred white men. And both black men and black women got the lowest response rates for their respective genders.

As a sociologist, I am entirely unsurprised that race matters, especially in such a personal process like dating/mating. However, these findings may come as a surprise to the (quite significant) segments of the population who identify as color-blind; those who label contemporary society post-racial.

And this is why dating sites are so cool. Social psychologists know that what people say and what they do have little empirical connection. Dating sites capture what we do, and play it back for us. They expose who we are, who we want, and of course, who we don’t want. As shown by Quartz, “we” fetishize Asian women while devaluing blacks.

With a schism between what people say and what they do; between what they say and what the unconsciously think, surveys of racial attitudes are always already quite limited. People can say whatever they want–that race doesn’t matter, that they don’t see color–but when it comes to selecting a partner, and the selection criteria are formalized through profiles and response decisions, we, as individuals and a society, can no longer hide from ourselves. The numbers blare back at us, forcing us to prosume uncomfortable cultural and identity meanings both personally and collectively.

Of course, what these sites tell us about ourselves does not stop at race. They also tell us that we care about things like income, physical (dis)ability and body size, exposing the range of isms that American prefer not to speak of in polite company, and certainly refrain from applying to themselves.

At an individual level, how someone fills in hir preferences and the way s/he engages (or refuses to engage) interested parties, tells that individual a lot about who s/he is. But dating sites, at a cultural level, are incredibly revealing even before the first user signs up. Indeed, before anyone has answered anything, the architecture of online dating sites say a lot. Namely, they tell us what we value. They tell us which characteristics are the ones about which we are likely to care; about which we should care.

More concretely, the moment a site prompts users to select racial identification and/or racial preference, an embedded race-based value system is both exposed and reinforced. As such, although the Quartz graph of user data is revealing, the presence of racial identification and racial preference on dating sites in general already demolish arguments about colorblindness and post-racial culture.

Jenny Davis is an Assistant Professor of Sociology at James Madison University. She writes about social psychology and new technologies. Jenny is a weekly contributor for the Cyborglogy blog (Cyborgology.org), where this piece first appeared.

Related Topics:Online dating
Up Next