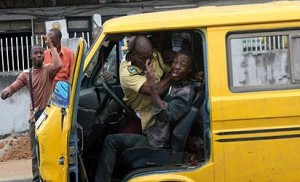 The judge delivered judgment in a suit filed by a lawyer, Mr Kameos Omosivwe, challenging impounding of his vehicle for months by LASTMA officials.

Abang also held that Omosivwe was at liberty to seek leave of the court to initiate contempt proceedings against a LASTMA official, Adewumi Adeosun, involved in the act.

He said that Adeosun flouted a ruling of the court.

“I held in that case that imposition of fine by the respondent, with respect to alleged traffic offences amounts to finding of guilt which is a judicial function.

“I also held that if a person is not found guilty of an offence, he cannot be made to pay a fine.

“Now, the respondent while being aware of the judgment in this case, intentionally flouted the order of this court.

“This is a clear case of “slapping the court in the face” and expecting nothing to happen.

“It is in line with this that I nullify all actions taken by the respondents on Dec. 23, 2012, and I declare same void.

The judge said that although the respondent had contended that the LASTMA Law, 2004, as enacted by the Lagos State House of Assembly, empowered its officers to carry out their duties, such laws could negate the principle of separation of power.

The judge declared that forcing motorists to pay fines by LASTMA  was assumption of judicial functions and therefore null and void.

The lawyer  filed the suit on Feb. 15, seeking a declaration that impounding of his vehicle by LASTMA violated his right to fair hearing.

He also sought a declaration that imposition of a fine on his vehicle by LASTMA constituted a violation of his freedom to own movable property.

In his originating motion, the applicant averred that the respondent towed his vehicle on Dec. 23, 2012 in Alausa, when he visited the Lagos State Lands Registry.

He said that he was instructed by security guards at the Lagos Mini Market to park his car near a closed gate since there were no more spaces at the car park.

“I spent 30 minutes in the registry; by the time I arrived at the parking spot, my car had disappeared.

“I made enquiries and discovered that the car had been impounded by the respondent.

“I thereafter visited its office at Elephant House to see the zonal head, but to no avail.

“I then met an officer of the respondent who told me that a ticket had already been issued for my vehicle to pay a fine of N5,000 for wrongful parking, N10,000 for towing, and N10,000 per day as demurrage for keeping the vehicle.

“I eventually met the zonal head on Feb. 8, and he showed me a photograph of my vehicle, which was a gross misrepresentation of the position of my vehicle before it was towed,’’ he said.

The lawyer said that he refused to accept the ticket for the fine since he parked the car on an instruction from a security man.