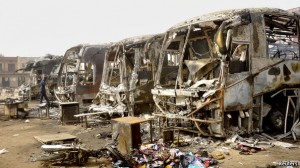 Image culled from The Economist

THE roads are thick with traffic and pavements throng with hawkers selling phonecards, sunglasses and leather sandals. At night, street corners are lit up with a red glow from grills cooking spicy meat. But the bustle of Kano, Nigeria’s second-biggest city and the commercial capital of the north, masks an uncomfortable reality: northern Nigeria is in steep decline.

An increasingly bloody insurgency waged by Boko Haram, an Islamist terrorist group, has sharpened frustration over the disparity between the jobless north and the oil-rich south. In recent months Kano has been relatively stable, following a military offensive to contain the terrorists. But though the pause in violence has brought people back onto the streets, they have rediscovered other problems. “Stoves are gone, people selling beer have gone, there is no market, there are few customers and I haven’t been able to save any money in months,” says Chineu Abason, sitting in her wooden-shack restaurant in Sabon Gari, a mainly Christian district, where Boko Haram bombs have killed scores of people this year (see picture above).

The fear of terrorism continues to cast a long shadow over the city and across the north. Bombings, kidnappings and bloody assaults by Boko Haram, as well as the army’s efforts to keep a lid on the fighting, have deterred investment. Farming, the north’s main source of income, has been hamstrung. Consumer-goods companies say that insecurity has forced them to retreat from some areas. Commercial drivers say dangerous roads and military checkpoints add 5-10% to their costs.

Despite a construction boom across Nigeria, many foreign companies avoid the north. In February seven employees of Setraco, an international construction company, were abducted in Bauchi state by Ansaru, a group that splintered from Boko Haram, prompting an immediate shutdown of the firm’s operations up north. PZ Cussons, the maker of Imperial Leather soap, and Guinness Nigeria are hanging on but have been hit by the conflict, too.

Even before Boko Haram’s insurgency intensified nearly three years ago, the north was struggling. Unreliable electricity, cheap Chinese imports, smuggling and counterfeit goods have made life hard for local companies. Vast spaces on Kano’s edges have become industrial graveyards. In rural areas the picture is bleaker still. Poor education puts off investors seeking skilled labour. Whereas the literacy rate in Lagos, Nigeria’s commercial capital on the coast, is 92%, in Kano it is 49%. In the north-eastern state of Borno, where Boko Haram got going, it is 15%. Without better education, the region will struggle to attract investment or create jobs. The malaise is a useful recruiting tool for terrorists, as well as politicians with their eye on the top.

Northerners habitually complain that politicians have made personal fortunes from the booming oil industry in the south, while failing to share its benefits. Mutterings of a north-south divide have grown louder with the prospect of President Goodluck Jonathan, a southern Christian, running for a second term in 2015. Northerners resent what they see as a violation of an unwritten rule that the presidency should rotate every two terms between the largely Muslim north and the mostly Christian south. A southerner has held the post for 11 of the past 14 years.

Nigeria’s finance minister, Ngozi Okonjo-Iweala, insists that the government recognises the north’s need. Nigeria has courted $20 billion of foreign direct investment in the past three years, 10% of the African total. Yet most investors set up shop in Lagos. “When we advise investors coming to Nigeria, they don’t even talk about the north,” says a South African banker in the plush Hilton Hotel in Abuja, the capital, which lies between north and south. “It simply isn’t a consideration. It’s the sad truth and it isn’t about to change.”

There are few signs of revival in Kano, though it is nearly as big as Lagos. “Shoprite OPENING SOON” is splashed on a red-and-orange sign where the Ado Bayero Mall, the north’s first modern shopping centre, is going up. It has been a long wait: Shoprite, a South African food distributor, has been operating in Lagos since 2005.

Such projects make little sense when many northerners, struggling to make a living, are deciding to leave Kano in search of better prospects—down south. “It is the only logical way for the government,” says the owner of a big construction company. “Visible development gives the impression of stability and progress.” But it will not be enough to close the gulf between Nigeria’s two halves. As a result, northerners are increasingly resentful.

Article read in the The Economist