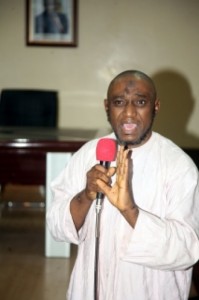 Recall that NewsWireNGR reported the arrest of a lecturer in Arabic Studies at the Kogi State University and four others for alleged involvement in terrorist activities?

Less than 48 hours after the State Security Services had paraded Yunus, who is  alleged to be coordinating a terror cell in Kogi state.

Hajiya Sa’adatu Shuaibu, wife of Boko Haram suspect, Dr. Muhammad Yunus, has said that security agents lied against her husband by labelling him a terror suspect and major financier of Boko Haram activities in Nigeria.

Hajia Shuaibu who resides in Jos on Friday said her husband was framed by the Security Operatives.

She also said her husband had never been a member of Boko Haram, but had consistently preached against the activities of the sect group until his arrest.

At NewsWire we do not want to assume the State Security Service will just go around arresting innocent citizens like is known of the police. Something must have linked the said lecturer to the terror group or if untrue, it might just be a case of mistaken identity.

We shall be following the story as it develops and we will keep our readers updated but it’s a good thing the woman is stepping out to speak for her husband (that’s if she knows all about his activities). The authorities should hear her out and carry out a thorough investigation into the allegations and eventual arrest of the lecturer.