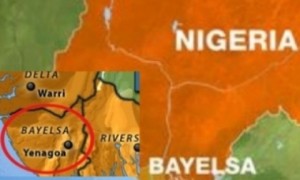 SaharaReporters says that Nine corpses have been recovered while many others were said to have sustained various degrees of gun and machete injuries.

The clash has to do with a long standing land dispute between both communities. The recent clash was brought about  by the presence on the site of some members of a committee which was set up to resolve the dispute; the presence eventually angered some of the youths.

“The committee went to the land today, but their presence on the land did not go down well with some youths.

The spokesman of Bayelsa Police Command,  Alex Akhigbe confirmed the clash but could not disclose the number of casualties at the time.

He said the command had deployed policemen to the communities and that sanity has been restored, but no arrests have been made.

Related Topics:Agudama-EpieAkenfaBayelsaYenagoaland dispute
Up Next