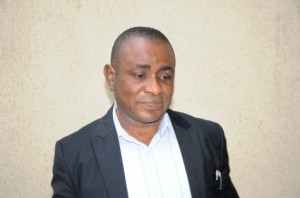 The Economic and Financial Crimes Commission on Tuesday, November 19, 2013 arraigned one Franklin Uche before Justice G.K Olotu of the Federal High Court, Maitama on a 6 count charge bordering on forgery and conspiracy to defraud.

The accused allegedly forged an Export Clearance Permit, a document usually issued by the Ministry of Trade and Investment, and which is a major requirement for the lifting of crude oil.

The offence is contrary to Section 6 of the Advance Fee Fraud and Other Related Offences Act 2006 and Section 1 (2)(c) of the Miscellaneous Offences Act, Cap. M.17 Laws of the Federation of Nigeria 2004.

The accused person pleaded not guilty to the charge when it was read to him.
Count one of the charge reads: “That you Franklin Uche on the 2nd of September 2013 in Abuja within the Abuja Division of the Federal High Court did, with intent to defraud, had in your possession a document titled Export Clearance Permit with Serial No: Q2250342 and which document you knew contained a false pretence and thereby committed an offence contrary to Section 6 of the Advance Fee Fraud and Other Fraud Related Offences Act 2006 and punishable under S. 8(b) of the same Act.”

The Prosecution counsel, Samuel Okereke announced that he had ten (10) witnesses who are ready to testify and asked the court for a trial date.
The Defence counsel, Chinedu Obi informed the court that he had filed a bail application since November 14 and that the prosecuting counsel has been duly served.

Justice Olotu granted the accused bail in the sum of N10 million and a surety in like sum.  The surety must be a director in the civil service. The accused person and his guarantor must deposit their passport photographs with the court. The accused is however to remain in Kuje prison pending when he perfects his bail terms.