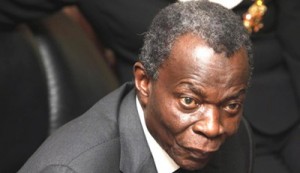 NOVEMBER 4, 2013 – Our attention has been drawn to comments by the former President of the Court of Appeal, Justice Ayo Salami, which tended to paint him in the mould of a victim and cast aspersion on eminent Nigerians including President Goodluck Jonathan, revered judicial officials and the institution of the judiciary.

In his comments, Justice Salami attempted to distort facts and history, an action capable of misleading the country, hence it became pertinent that we put the records straight.

Contrary to what the opposition linked media would like the public to believe, it would be recalled that the National Judicial Council (NJC), the supreme juristic body in Nigeria, found Justice Salami guilty of having perjured himself and lying against the then Chief Justice of Nigeria Justice Aloysius Katsina-Alu.

It is also public knowledge that President Jonathan, being a man governed by the Rule of Law, refused to take sides or interfere in the matter and chose to allow the judiciary sort out its complications in the Salami affairs, more so as Justice Salami had gone to court to challenge the findings of the NJC.

This is even in the face of damning evidences against Justice Salami including the testimony of MTN Nigeria which admitted in an open court that call logs tendered in evidence were in fact true records of a series of calls between leaders of the defunct Action Congress of Nigeria (ACN) and Justice Salami who presided over the Court of Appeal that over-turned governorship elections in Osun, Ekiti and Edo States in favour of the ACN

The fact that President Jonathan did not retire Justice Salami as recommended by the NJC is a stand for which Justice Salami should be grateful to the President who decide to be neutral in the matter.

Instead of quietly returning to his home, Justice Salami has chosen to play the victim. However, Nigerians are no fools. Justice Salami’s public romance with the beneficiaries of the controversial ruling of his Court, including governors who won their seats by virtue the ruling and as other ACN chieftains at his book launch recently, openly betrays the hidden facts regarding the handling of the election appeals under him. This clearly raises issues regarding his culpability by association to pervert the course of justice in the issue.

It is highly unfortunate that after spending about 45 years in the judiciary, Justice Salami will chose to betray the institution and his colleagues and cast aspersions on highly revered judicial figures such as Justices Katsina-Alu and Dahiru Musdapher who served Nigeria meritoriously and were not known to align themselves with politicians whether in secret or in private as in the case of Justice Salami who now sits with his accomplices in the defunct ACN and try to mar their records of service to the nation.

Furthermore, Nigerians should note that under the administration of President Goodluck Jonathan, Separation of Powers and respect for the Rule of Law have been the hallmark such that there have been no Executive/Legislative face off and court judgments have been obeyed. Also, elections under this administration have been free, fair and credible and have resulted in an over 100 percent reduction in election petition cases.

Our candid advice to Justice Salami is that it is impossible to gain the confidence of new friends by betraying old friends.