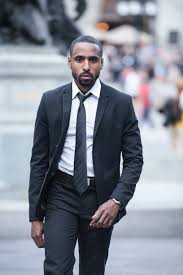 It is pretty interesting to know that gentlemen wear Suits because it gives a calm look. That’s why some jobs require you to be fully dressed in it while on duty.

So many organizations have adopted Suits as the attire you must show up in when attending their interview for recruitment and even after getting the job.

They believe this is a criterion you must meet. Everybody wants a gentleman for the job, as wearing a suit gives that impression.

In Lagos, anybody wears Suits. I once saw a bus conductor wearing a suit, not your usual blazers. I believe he’s trying to be a gentleman in his job.

But is everybody on Suits in Lagos a gentleman or gentlewoman? I think it is different in this part of the world

A few weeks ago, I was at Allen avenue in Ikeja, the capital city of Lagos and beside me at the bus stop was a gentleman wearing a suit and soliloquizing so loudly that all of us at the bus stop kept staring at him.

While speaking to himself, he was spreading his arm in anger, and from his utterances, I could deduce that his boss at work had annoyed him.

He’s swearing at his boss and threatening that the next time his boss repeats what he tried with him today, he’ll show him that he’s a madman.

This is a gentleman on the outside, but inside, the real mad is at work.

Lagos is known to have many troublemakers, especially commercial bus conductors. Most of the time, their plans are to either make you pay a double fare or you forget your change with them.

After a rough day at one of those interviews I attended for job applications, I decided to trek a little bit to beat the Lagos traffic to save a little money and avoid sitting in traffic.

After trekking for about 30 minutes, I finally walked past the traffic and took a bus.

A few minutes later, a bus came with an inflated fare, but the lucky ones could hop in with great tussles for fear of not knowing how long it will take another bus to come. I got on the bus sweating because it was in a hot weather.

The suit was not helping matter as it aggravated the sweat, and it took me about 15-20 minutes on the bus before my temperature returned to normal.

Everybody looked stressed and angry on the bus, yet we all maintained our cool but not without insults thrown at the conductor before giving him the fare for inflating it.

I was on the bus ruminating over the amount of “we’ll get back to you” from the five interviews I attended that month.

I was soaked in this thought with anger when the conductor asked for my fare.

Lagos bus conductors will pretend you’ve not paid and throw their usual gimmick at you by asking for the fare again.

The conductor was unfortunate to have thrown the jab at me that day, and he saw crazy. The mad inside Lagos men in Suits came out of me that day, which wasn’t funny.

The conductor was shocked because his guess of gentlemen being in suits was wrong that day.

The frustration of the latest “we’ll get back to you” I got from the interview I attended and the annoyance of the inflated bus fare triggered the anger.

Even as I tried to hide my frustration, it wasn’t without exchange of a few threats and insults with the conductor.

Luckily, people on the bus who saw me when I paid intervened, and I got my change. Even after getting my change, it is normal to remind the conductor that he was fortunate you’re not in your vibrant madness mode, or else things would have escalated than it is at the moment.

This wouldn’t have been achievable without the timely display of madness, even while in a suit.

All over the world, suits might be for gentlemen except for Lagos gentlemen.

If you want to see crazy, annoy a Lagos gentleman or woman in a suit and get a full dosage of “e fe ri weyrey”. Wearing a suit in Lagos doesn’t mean you’re normal; it just means your madness is in a state of pseudo-rest and can be activated at the slightest provocation.