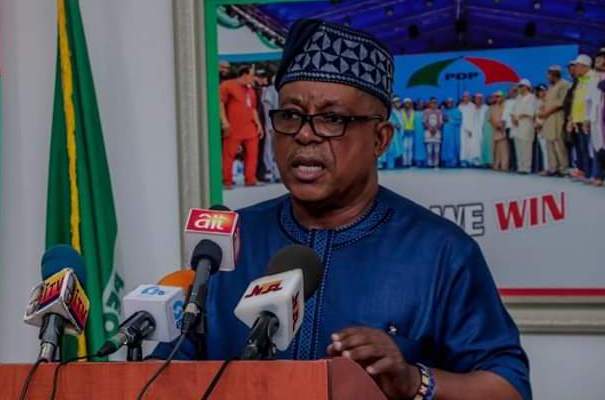 The Peoples Democratic Party (PDP) has offered to assist the President Muhammadu Buhari administration tackle insecurity and other challenges facing the nation.

The National Chairman of the party, Prince Uche Secondus, made the offer during a world press conference organised by the PDP, in Abuja, on Monday.

Secondus, who said the country is better together, said his party will work in concert with the ruling APC to rescue the nation from all the avoidable “perilous circumstances”.

“We call on all citizens to support the quest for state police as is the tradition in other federations.”

“Mindful of the current plethora of vigilante in various parts of the country, which have not been enabled to carry out all the elements of effective policing, we call on the governors of the 36 states, the leadership and members of the National Assembly, the Speakers of the State Assemblies, relevant agencies of government, to occasion a summit for a one-stop-shop regarding the creation, structure, and management of state police.

“In spite of the concerns over state police, it is doubtful that 36 state police services can be easily overwhelmed, as is the case now with the unitary police. Besides, any challenges can be addressed through legislative framework to make abuse extremely difficult, if not impossible.

“We also call for the deployment of technology in the fight against terror, banditry, and other crimes. The PDP demands that all culprits should be brought to book. The apparent failure of intelligence to track attacks by bandits and follow up on them is a clear failure of the intelligence community.

“The Nigerian Communications Satellite Limited NIGCOMSAT, established many years ago by a PDP administration, is designed for this purpose and others. States where matters of national security challenges originate or exist should be invited to the National Security Council Meeting for deliberation and problem-solving interactions.

“We call for the creation of National Borders Protection Force to secure our borders. This will include an integrated border protection system that will draw personnel and equipment from existing armed service and Immigration.

“We cannot continue to watch while terrorist and bandits continue to levy war on our nation, through our porous borders. This borders force should be equipped with reconnaissance, intelligence gathering, prevention, and enforcement. It should therefore have air, sea, and land capability.

“There must be a synergy and cooperation among the armed services, strategically and operationally. There is no reason a theatre Commander should not have within his control the deployment of the Air Force, the Army, and the Navy in his operational area.

“All culprits, who have levied war on Nigeria, should be brought to book. It is unfathomable that several mass kidnappings have been successfully staged with the culprits not being held to account,” he said.

2023 general elections may not hold if insecurity continues – APC Chieftain

‘We were justified in not supporting Buhari’ – Pa Fasoranti