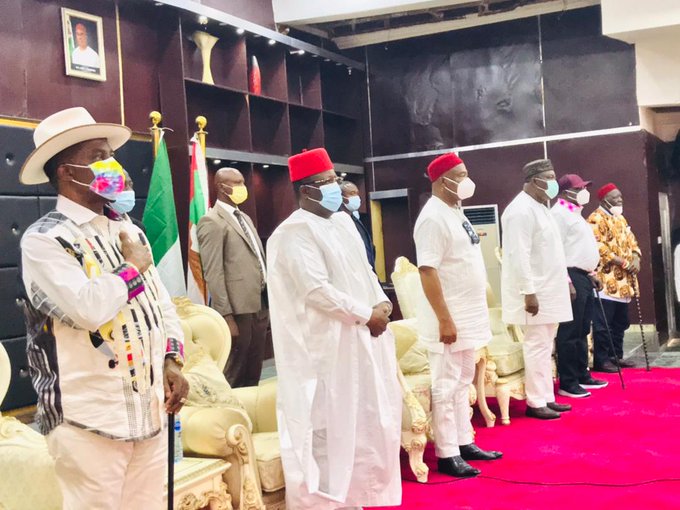 Since the South East governors of Nigeria hurriedly announced the formation of Ebubeagu Security Network, a cross section of Easterners have described it as a myth because of the timing and the style it was constituted. Moreover, some have argued that there was no need for another security network when already there is Eastern Security Network which was floated by the run away leader of the Indigenous People of Biafra.
There are divergent views in the region over the formation of Ebubeagu Security Network. While those of them on the bandwagon of separatist movement see it as an outright sabotage on the part of the governors, others on the train of one Nigeria have congratulated the governors for taking what they tagged as giant step.
Despite the conflicting views and interest over the formation of Ebubeagu Security Network, one important question still remains: is Ebubeagu Security Network myth or reality? I will not be far from the truth if I should say that Ebubeagu Security Network is a myth and not reality. The governors in the first place did not show sincerity of purpose in their mission. It has not been done anywhere that a security organization will be established without its personnel and logistics on ground. It was a complete miscalculation on the part of the governors to have embarked on such tasking project without adequate arrangement.
At least, the South West governors were able to set a good precedence. I expected the governors in the East to replicate the same process without unnecessary ado. When Amotekun Security outfit was conceived by the leaders of the Western region, much of the logistics needed for their operation was readily available. It wasn’t a mere paper pronouncement. And the people of the region immediately supported the idea as soon as they saw the genuine effort made by their leaders.
The South East governors seems to be acting on the contrary, as if someone somewhere is dictating for them what to do. The governors openly appeared more ready to sacrifice the safety of the region under the convoluted alter of non-existing one Nigeria considering the intrigues that greeted the formation of the entire security charade.
It took longer time for the South East governors to announce the formation of the security network. It came after the outcry of the people were unfortunately getting to the roof top. Probably, if the last attack masterminded by the terror herdsmen in Ebonyi and Enugu States didn’t happen, the governors wouldn’t have been so perturbed to set up the shadow security outfit.
Accordingly, the governors must also take much of the blame over the rising insecurity in the region. Their lukewarm attitude and reliance on Nigeria’s failed and lopsided security architecture fuelled the horrible security situation which is currently tearing the Southeast apart. If they had followed their Southwest counterpart to do the needful, non state actors today wouldn’t have been brandishing AK 47 rifles all in the name of security network.
The absence of responsive and accountable leadership created the lacuna for non state actors to come in and further complicate the security woes of the region. It will take a longer time to revise this ugly trend. The governors must sit up and stop acting slavishly.
However, it will amount to a very disgraceful slap on the face of the governors if the much touted Ebubeagu Security Network turns out to be another political sham. We must not forget “insecurity is a terrible thing”. This is the time for action!
______________________________

Kalu Nwokoro Idika is a writer and investigative journalist
kalunwokoroidika@yahoo.com.