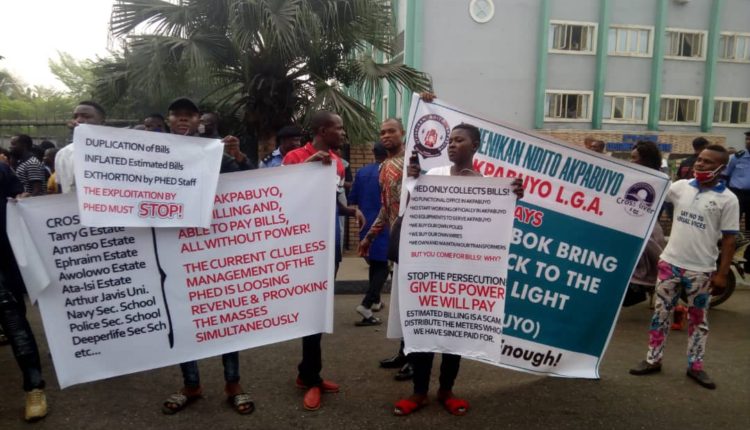 Men of the Cross River State Police Command yesterday, Wednesday, February 17, 2021 dispersed hundreds of Youths under the aegis of the National Youth Council of Nigeria (NYCN) from Akpabuyo and Bakassi Local Government areas who held a protest at the Cross River State head office of the Port Harcourt Electricity Distribution Company (PHED).

The group carrying placards and banners, called for the sack of Mr Maurice Ibok, Head of Commercial, Port Harcourt Electricity Distributing Company (PHED), Calabar Zone, accusing him of incompetence and corruption, and blaming him for the blackout in their communities.

The youths numbering over 200 blocked the Calabar road from 11-11 to Total Filling Station by Mary Slessor for over 4 hours before the police were called in to disperse them.

The protesters carried placards with inscriptions including; “Maurice Ibok must go!,” “We are tired of a blackout caused by Maurice Ibok,” “Bring PHED office to Akpabuyo and increase your staff strength,” “Enough is enough!” amongst others.

Some of the protesters who spoke to NewsWireNGR said they have not had power for about 2 years now, and before that was forced to paying inflated estimated bills and demanded electricity metres when power is finally restored.

One of the protesters who identified himself as Etim John said PHED has deliberately refused to set up an office in the area.

” We buy our poles, we buy our wires and we pay for anything they have to do for us and yet, we have been left in darkness for 2 years now.” He said.

Another protester, Effiong Archibong said they are on the street because PHED has refused to have a staff in the local government and has disconnected them from the national grid.

“Places like CROSPIL, Police Secondary School, Arthur Jarvis University, Navy Secondary School are ready and can pay their bills but they have no light and no one to complain to. That is why we are all here with one voice today. We can’t be treated like second class citizens in a country that is ours.” He cried.

dispersing the protesters, the State Commissioner of Police, CP Sikiru Akande said while the youths might have legitimate grievances, it is the job of the police to maintain law and order and advised the protesters to meet with the management of PHED to sort the matter.

“We have advised them (protesters) to meet with the manager of PHED to sort things out. Meanwhile, we are going to open the gates and clear the road for the people to go about their businesses”, CP Akande assured.

Meanwhile, the PHED Manager, Maurice Ibok refused to address the press at the time of the protest.