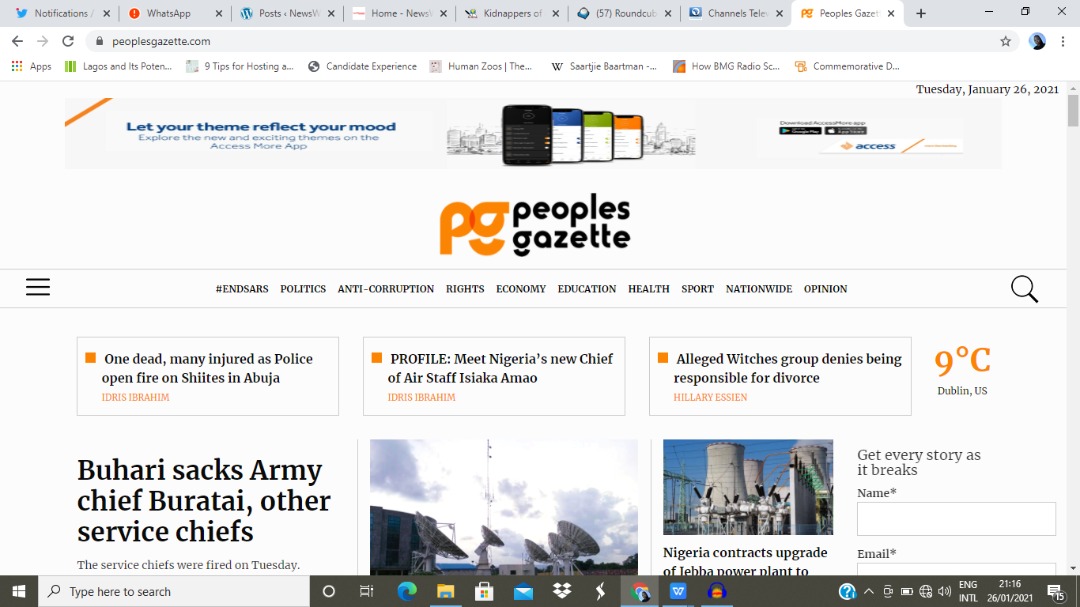 Peoplesgazette.com a newly launched news website has been blocked on 9mobile, Glo and MTN networks in Nigeria and concerns rise over the blockage.

Mr Samuel Ogundipe, the founder of the website in an interview with NewsWireNGR on Tuesday said, “We observed as of 7:00 p.m. that our website was no longer accessible to people on MTN and Glo, meaning a vast majority of Internet users in Nigeria”.

Checks by NewsWireNGR as at the time of filling this story shows that users using the aforementioned networks can only access the website that prides itself as “TRUTH COURAGE OR NOTHING” only via VPN but the website was still accessible through 9mobile.

Mr Ogundipe, however said, “Airtel and 9Mobile are fine, as other networks.” When asked what must have led to the blockage, the Journalist explained,”it’s about “two or three stories” we ran and they went to about looking for me. It’s just annoying”.

However, when NewsWireNGR ran an independent check about 30 minutes later, the website was no longer accessible via 9mobile

This is not the first time, access to news websites is blocked from viewership in Nigeria, in 2017, the NCC disrupted access to websites considered too friendly to the cause, including that of Naij, one of the most visited news platforms in the country (Naij eventually had to change its name).

It is however not clear if this latest attack on a website known to be critical of the Nigerian Government is being yanked off by the regulators through the telecommunication networks, but Ogundipe tells NewsWireNGR, “We are still investigating the source of this disruption, we have strong grounds to believe that it was deliberate based on the preliminary conclusion of webmasters”.

He added that, the Nigerian telecom firms have a history of acquiescing to repressive orders from state actors without recourse to the Nigerian Constitution, which is why we would not yield any resources to fight back against this through available civil authorities.

After Naij was blocked, a digital rights advocacy group, Paradigm Initiative in a recent Interview with NewsWireNGR had said the organisation, sued the NCC over that incident but the case was struck out on a technicality. Gbenga Sesan, the executive director of Paradigm Initiative, told noted that, “there must be other websites blocked by the government between 2017 and 2020, and we are probably not aware of them because you need to know the affected websites to be able to test.”

Related Topics:NigeriaGlobacommtnpeoples Gazette
Up Next