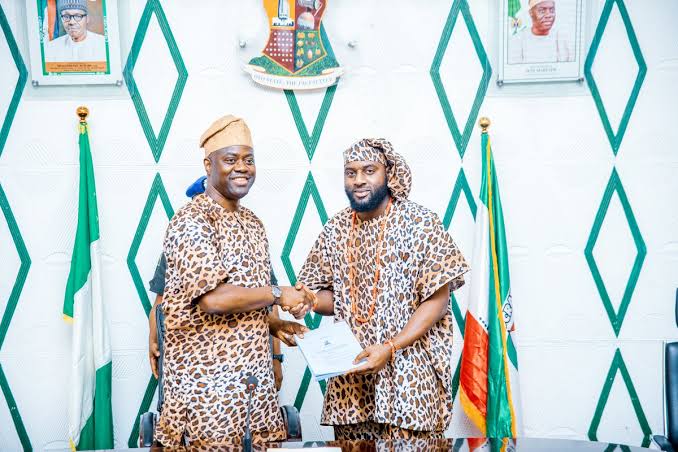 The Peoples Democratic Party (PDP) Oyo state chapter, yesterday, said that it suspects opposition parties in the state of having a connection with the production of fake Amotekun corps uniforms for sponsored hoodlums to cause mayhem in the state with the aim of blackmailing the Makinde led administration.

The party maintained that nothing could have emboldened any resident in the state to venture into such crime of sewing fake Amotekun corps uniforms for anyone if not backed by some groups and individuals with untamed desperation to discredit the hard-earned reputation of the present administration through commitment, dedication, and consistent delivery of good governance making any other political party’s chance of wrestling power from Makinde come 2023 a near impossible adventure.

The party, in a statement, signed and made available to journalists, by its Publicity Secretary in the state, Engr. Akeem Olatunji, explained that the ruling party was seriously appalled by the unfolding development of unbridled hunger for power and untamed desperation by the opposition in the state to deploy all available means to discredit Governor Makinde’s giant strides and efforts in the war against crime within the state.

The statement read: “It was another great achievement for the state and the Amotekun corps to have discovered and apprehended one of the agents of darkness in our dear state who have perhaps been recruited by the opposition of our government in Oyo state to heighten insecurity and create an atmosphere of chaos so that the foiled and failed agenda they have been pursuing since the inception of this administration could materialize.”

“It is not a news anymore to all residents in Oyo state that the Oyo state chapter of the All Progressives Congress (APC) has deployed all forms of evil machinations, treachery, and malicious propaganda against the PDP government under the able leadership of His Excellency, Engr Seyi Makinde since he assumed office as the executive governor.”

“In fact, one of their serving Senators once boldly told the world in a show of untamed desperation and hunger for power that the Makinde led government could not escape all three traps his party had set for Governor Seyi Makinde in a battle to steal Oyo people’s mandate through the backdoor using federal might, a move which not only failed woefully but further exposed them and their evil agenda to the world.”

Governor Seyi Makinde has consistently said that the present administration is open to constructive criticism and useful suggestions on ways to make the state a much better place for all to live but what we have continued to witness from our opposition in Oyo State is nothing near constructive criticism but deliberate attacks and well-orchestrated plan by the Oyo APC to bring down this government at all cost using insecurity which is part of their evil agenda as an excuse to advance whatever script they are executing.”

“We wish to state categorically for the sake of the record, that Governor Seyi Makinde is among the very few Governors who have invested heavily on security since assumption of office.”

“It is also on record that he has invested in the security architecture of the state more than the immediate past APC government despite only been in office as the Executive Governor in less than two years, but since our detractors who have continued to meet shame and disappointments at the end of each executed agenda will neither rest nor desist, we as the party in government will always be at alert and remain unfazed because light will always prevail over darkness.”

“We will not urge them to stop because the good people of Oyo State already know them for what they are and what their party represents but we will continue to stay ahead of them and their evil agenda because we know there may be other recruits by these evil party elsewhere producing such fake uniforms to perpetrate, aid, and albeit crime with the aim of creating tension and apprehension within the state but just like this one, we assure them that they will be caught and severely dealt with according to the law.”

“God has blown away the ill wind of untold hardship, hunger, modern-day slavery by government, which characterized the entire 8 years of APC administration in Oyo State and the good people of the state can now attest to the difference between false propaganda and practical delivery of good governance, therefore, all attempts by the agents of darkness to return Oyo state to the dark era between (2011-2019) shall be resisted either through the backdoor or through election poll by the people again and again.”

“We urge the good people of Oyo state whose trust in governor Seyi Makinde and the PDP has birthed new dawn of prosperity under safe and secured Oyo state to be on alert and continue to support the present government to succeed even more, because it is now clear that these agents of darkness in their desperate hunger for power are waging a war to steal their mandate freely given to governor Makinde who has only the masses as his godfather, through the backdoor at all cost.”

2023: Nigerians should reward Tinubu with Presidency – House of Rep member