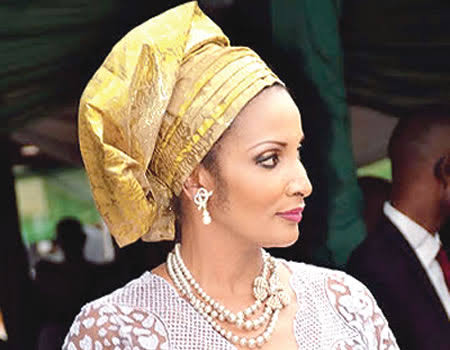 Emeka Ojukwu, Son of Late Dim Chukwuemeka Odumegwu-Ojukwu has exchanged words with his father’s wife, Bianca Ojukwu over a recent interview with journalists.

Bianca had on Thursday, November 26, said that the Late Dim Chukwuemeka Odumegwu-Ojukwu,  would feel vindicated with the recent calls for restructuring in the country.

She attacked the present Governor of Anambra State, Willie Obiano over not holding a memorial for the Late Ojukwu as Imo State.

She claimed that the governor does not know the philosophy of the party built by Ojukwu.

She said, “The fact, if one has to be candid, is that Governor Obiano was a stranger to our political party who knew next to nothing about APGA’s founding principles, ideology and history.

This is also the case with the current national chairman of the party (Chief Victor Oye).

As a result, managing this political movement has proven to be a difficult task for the governor who also doubles as the party leader, especially in his second tenure as he continues to perpetuate the politics of divide and rule whilst exhibiting scant regard for the key political figures and factors in the party that made his emergence possible.”

While reacting to Bianca’s statement through a press statement on Thursday, Emeka Ojukwu has been confirmed as a governorship aspirant said that Obiano deserves respect.

He said that his father did not share any private information and that Bianca should respect his father and stop ridiculing his legacy.

“I would have taken a pass on the insinuations, innuendos and outright falsehoods made in the (Bianca’s) interview. I find it exigent from the perspective of an insider, to present the truth so as to preserve and protect the ideals that my late father and mentor held sacred.

“Given his standing by birth, heritage, disposition and calling, Dim Chukwuemeka Odumegwu-Ojukwu never shied away from fully expressing his feelings, observations and apprehensions.

“As a matter of fact, he documented his views concerning Biafra and Nigeria in books and live interviews for ease of reference. Any attempt, therefore, to recast or present his views regarding Biafra or Nigeria without proper references should be considered dead on arrival.

“Claims therefore of what the legend told or did not tell the claimant (Bianca) about Biafra/Nigeria, should be regarded as the views of the said claimant, in pursuit of what, I don’t know.”

““I do not need to be tutored in the proclivities, idiosyncrasies and mannerisms of my late father. As such, I therefore, make bold to state without fear of contradiction that the Dikedioranma Ndigbo I know, never equivocated.

“If he had something worthwhile to say on a subject, he would have stated it on record and not passed it through any intermediary.

“Having worked for many years closely with Governor Obiano, I can, with the same level of confidence, state unequivocally, that he did not and would not make the disparaging and false statements towards my late father, attributed to him in that article.

“Dim Chukwuemeka Odumegwu-Ojukwu out of altruism and with respect to the love he had for Ndigbo, donated pro bono his identity and image to the All Progressives Grand Alliance for perpetual appropriation and usage.

“His image remains till date, the oxygen that powers the ideals of APGA. It is therefore preposterous for somebody out there to insinuate that the APGA National Leader and Governor of Anambra State, Chief Willie Obiano would contemplate and entertain discussion on disconnecting the Party from its lifeline with the claimant of all people. Where? How? When?.

“What I see playing out is frustration occasioned by the reckless, unrestrained, disrespectful expectations of persons who take delight to pontificate on matters about which they know next to nothing.

It is most uncharitable to opine that His Excellency Governor Willie Obiano is the leader of a party whose and I quote: “founding principles, ideology and history he knows next to nothing about,” he said.