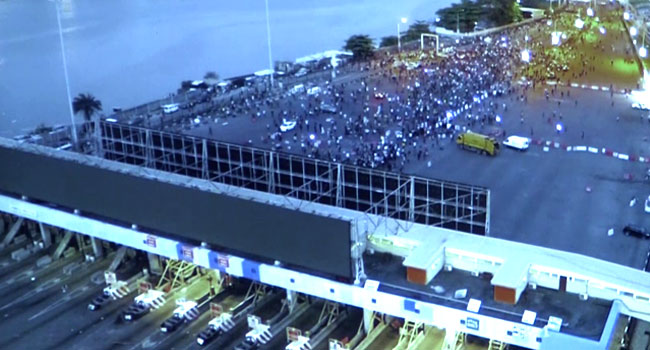 The Nigerian Army has admitted that it took live and blank bullets to the Lekki tollgate in Lagos – the venue where #EndSARS protesters staged a peaceful demonstration against police brutality.

A representative of the army, Brigadier General Ahmed Taiwo, stated this on Saturday when he appeared before the Judicial Panel of Inquiry set up by the Lagos State government to look into the allegations of brutality by the disbanded Special Anti-Robbery Squad (SARS) and other issues raised by the Nigerian youths.

General Taiwo, however, informed the panel and others present that the live rounds were not used on the protesters

While being cross examined by Olumide Fusika, a Senior Advocate of Nigeria (SAN), Taiwo insisted that no one was shot dead as soldiers only fired blank ammunition at the protesters and not live rounds.

He said that they were meant for the protection of the army team that was deployed to restore order in the state.

Despite evidence of people being killed and injured at the Lekki incident, the army representative said the soldiers only used blank bullets while their colleagues with live rounds were on ground to protect them from suspected hoodlums, who caused trouble.

The Army also vowed to repeat the same action it took at the Lekki tollgate if such a situation arises again.

Soldiers had forcefully dispersed #EndSARS protesters who converged on the tollgate for 13 days.

The incident had triggered an outrage, within and outside the country.

The army had maintained that blank bullets were used to disperse the protesters who were out on the streets during the time the Lagos state government imposed a curfew.

The commander of the 81 division of the Nigerian Army, said given the same circumstance, the army would act in a similar to that of October 20, 2020.

The government announced Sunday the unit had been disbanded, but many Nigerians are skeptical, as officials have promised an end to the unit and its alleged abuses before.

Just In: Police officer attached to a VIP kill one and critically injure another in Ekiti