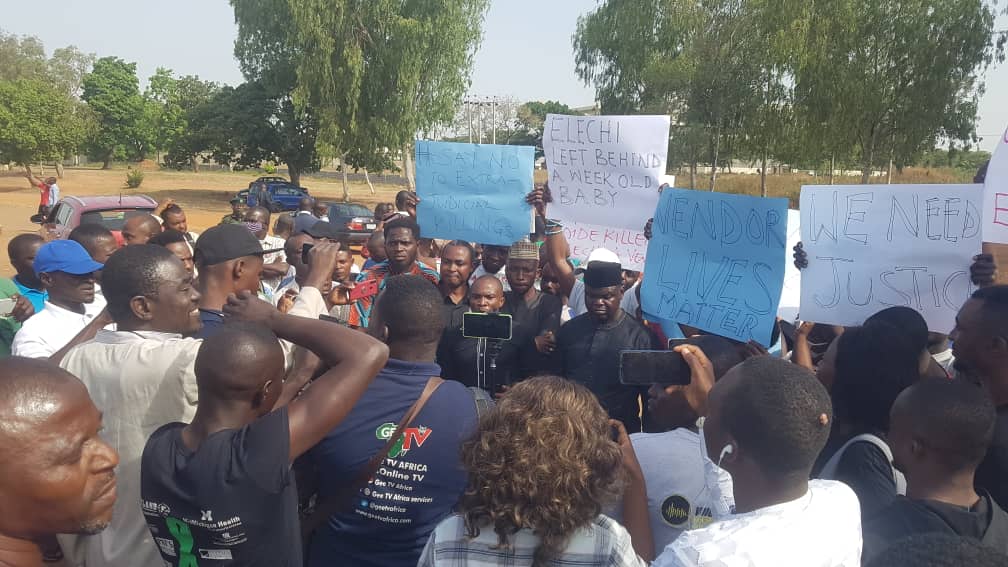 Newspapers vendors in the Federal Capital Territory on Friday protested the killing of their colleagues, Ifeanyi Elechi, who was shot dead on Thursday by a security aide to the Speaker, House of Representatives, Femi Gbajabiamila.

The vendors who were carrying placards, demanded justice, insisting that the errant operative who is believed to be a Department of State Services operative must be brought to book.

Gbajabiamila has issued a statement expressing regrets over the tragedy and announcing the suspension of the officer involved.

He said he was not aware of the incident until much later, adding that he was gutted by the killing.

The shooting incident happened when Elechi and other street vendors selling on the Shehu Shagari Way, Three Arms Zone, flocked around the convoy of the speaker who was said to be in the habit of giving out money anytime he passed them.

Chairman of the Newspapers Vendors Association in FCT, Etim Eteng, said the association would not allow the matter to be “swept under the carpet.”

According to him, the vendor’s death was not the result of accidental gunfire or stray bullets, noting that he was shot point-blank by the unidentified security officer, stressing that there were witnesses at the scene.

Eteng stated, “We are gathered here today to demand justice for Elechi who was killed extra-judicially. Extrajudicial killing means the killing of an individual by a security operative without judicial proceedings and this is what has happened. The vendors association through their legal adviser are demanding justice.

“The overzealous security operative who killed Elechi must be brought to book; he must face the wrath of the law. We know that over time, judicial killings have been swept under the carpet but this time, the death of this innocent man who left his wife and new-born baby to look for his daily bread and was killed by an aide to the Speaker of the House of Reps must be probed and the killer brought to book.

Meanwhile, the Federal Capital Territory (FCT) Police Command has denied reports that a policeman attached to Speaker Femi Gbajabiamila, fired the gun that killed a newspaper vendor on Thursday in Abuja.

Police Public Relations Officer, ASP Yusuf Mariam, in a statement on Friday, said the security agent, who fired the shot was not a policeman, according to preliminary investigations.

She said the Commissioner of Police FCT CP. Bala Ciroma has ordered a discreet investigation into the incident.

It reads: “The FCT Police Command wishes to unequivocally refute the allegation making round sections of the media that a Police officer attached to the convoy of the Speaker of the House of Representatives shot at a newspaper vendor within the Three Arm Zone on Thursday 19th November,2020.

“Contrary to the misleading information, preliminary investigation into the unfortunate incident reveals that the security aide who shot at the vendor is not a member of the Nigeria Police Force.

“However, the Commissioner of Police FCT CP. Bala Ciroma has ordered a discreet investigation into the incident.

“While commiserating with the family and friends of the deceased, the Commissioner of Police wishes to guarantee members of the public that the Command will be lucid in its investigation and ensure the findings are made public.”

Meanwhile, the Speaker of the House of Representative, Femi Gbajabiamila has confirmed the death of a newspaper vendor shot by one of his security aides on Thursday.

Gbajabiamila who, in a series of tweets on his official handle in the early hours of Friday, narrated how the incident took place, explained that the vendor was hit by a stray bullet meant to disperse a crowd when he went to greet newspaper vendors while leaving the National Assembly.

“A horrible incident has taken place. This evening as I left the national assembly, I stopped, as usual, to exchange pleasantries with the newspaper vendors at the corner,” he explained.

“Many of them have known me since I first moved to Abuja and it was a friendly exchange. Unfortunately, after the convoy set out in continuation of movement, unidentified men obstructed the convoy which got the attention of security men in the convoy who shot into the air to disperse them.”

The Lagos lawmaker narrated that some hours after they got to their destination, he was informed that the victim, identified as Ifeanyi had been hit by a stray bullet.

He said this was “contrary to an earlier report by men in the convoy that they applied their security discretion to shoot in the air.

“In the meantime; the officer who fired the fatal shot has been suspended from the convoy pending the conclusion of the investigation.”

While sending his condolences to the family of the deceased, the Speaker expressed distraught about the incident.

“For one of them (vendors) to have been shot by my security detail is horrific and I cannot begin to imagine the grief and loss Ifeanyi’s family must feel on this sad day. No family should have to go through this,” he added.

“I have caused a report to be made to the local police station and an investigation has commenced. My value for human life and my respect for all people – irrespective of social-economic status – is what endeared me to these vendors and these are the reasons why I stop my convoy quite often to connect with them.”

Just In: Police rescue 9 police officers who were abducted by bandits

“It was not a stray bullet, he was shot in the head” – eyewitnesses speak on the death of Abuja vendor