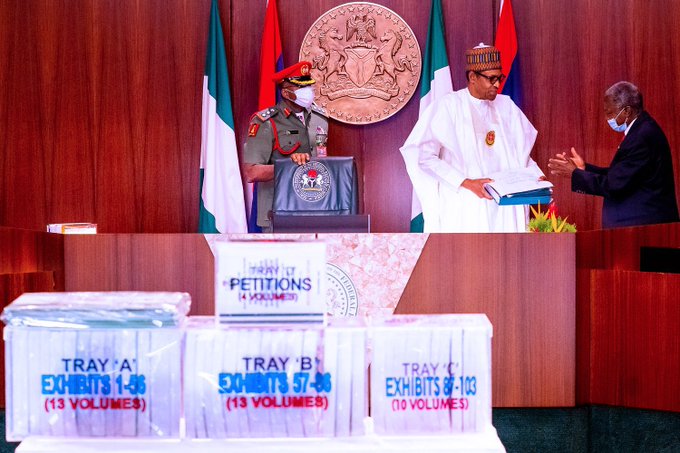 The Justice Ayo Salami panel has recommended the sack of Ibrahim Magu, a commissioner of police, as the acting chairman of the Economic and Financial Crimes Commission (EFCC).

The remarks were made when President Muhammadu Buhari on Friday received the final report of the Justice Ayo Salami-led probe panel on alleged infractions by the suspended Acting Chairman of EFCC, Mr Ibrahim Magu.

The panel, which submitted its report to President Muhammadu Buhari on Friday, also asked the president to appoint the new EFCC chairman in an interim position for two years.

Magu is being investigated following allegations made by the Attorney-General of the Federation and Minister of Justice, Abubakar Malami.

They include the “alleged sale of seized assets to cronies, associates and friends.” Magu denies the allegations.

In his address, The President said so far, his administration has kept faith with the promise and shall remain committed until Nigeria triumphs over the evil of corruption. He promised that the nation shall attain a prosperous economic status and surmounts her security challenges.

“Let it be known that in the fight against corruption, no one is too big to tackle, as no individual is bigger than the Nigerian State!” President Buhari said.

The report containing four boxes of exhibits were presented to the president at the Council Chamber of the State House, Abuja.

The Salami Panel, which was inaugurated by the president in July, was given 45 days to carry out its assignment but the timeframe was later extended after the panel requested for more time.

Magu was allegedly accused of corruption, mismanagement, lack of transparency in managing recovered assets by the commission as well as abuse of office by the Attorney-General of the Federation and Minister of Justice, Abubakar Malami.