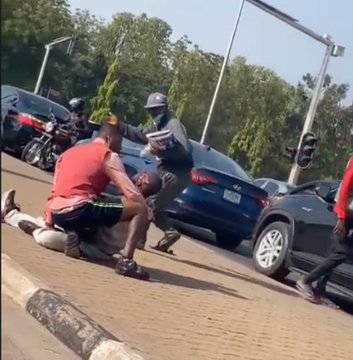 Despite claims by House of Representatives Speaker, Femi Gbajamiamila that a security officer who killed the Abuja vendor fired the bullet to disperse crowd on Thursday, fresh facts from eyewitnesses have countered the claim and said that the said security personnel shot the vendor in the head.

The eyewitnesses who spoke to People’s Gazette say that the Police officer intentionally shot Ifeanyichukwu Elechi — father of a two-week-old child in the head after the Speaker’s convoy was swarmed by a cheering crowd at the Eagles Square, Abuja.

Wakili Usman, an eyewitness told the People’s Gazette said, “It was not a stray bullet. The Speaker’s convoy was halted by the traffic light at about 4:00 p.m. on Thursday. My taxi was behind his convoy.

“Vendors around the Eagle Square are usually fond of crowding around the convoy of prominent people, who sometimes wave at them or give them stipends during gridlocks,”

“The Speaker’s convoy comprising about four SUVs and three pickup vans rushed past the crowd and a policeman in the last pickup van, who was possibly drunk shot the unarmed vendor in the head — a young man who had only his newspapers in his possession.”

Another eyewitness who preferred to be unnamed said that the policeman indeed shot the vendor in the head.

“The police vehicle blocked the convoy around the Transcorp area and informed them of the killing. If the police patrol vehicle hadn’t chased after the Speaker’s convoy, they probably would have denied the incident,” he said.

“The Speaker’s convoy immediately reversed and was headed for the scene but stopped at Unity Fountain on the advice of his security detail in order to avoid a riot.”

Recall that NewsWireNGR reported on Thursday that a Police Officer attached to Femi Gbajamiamila’s killed a newspaper vendor in Abuja.

Femi Gbajamiamila confirmed and narrated how the incident happened in  a series of  tweets he released in the early hours of Friday.

“A horrible incident has taken place. This evening as I left the national assembly, I stopped, as usual, to exchange pleasantries with the newspaper vendors at the corner,” he explained.

“Many of them have known me since I first moved to Abuja and it was a friendly exchange. Unfortunately, after the convoy set out in continuation of movement, unidentified men obstructed the convoy which got the attention of security men in the convoy who shot into the air to disperse them.”

However, Police Public Relations Officer, ASP Yusuf Mariam, in a statement on Friday, said the security agent who fired the shot was not a policeman, according to preliminary investigations.

She said the Commissioner of Police FCT CP. Bala Ciroma has ordered a discreet investigation into the incident.

It reads: “The FCT Police Command wishes to unequivocally refute the allegation making round sections of the media that a Police officer attached to the convoy of the Speaker of the House of Representatives shot at a newspaper vendor within the Three Arm Zone on Thursday 19th November,2020.

“Contrary to the misleading information, preliminary investigation into the unfortunate incident reveals that the security aide who shot at the vendor is not a member of the Nigeria Police Force.