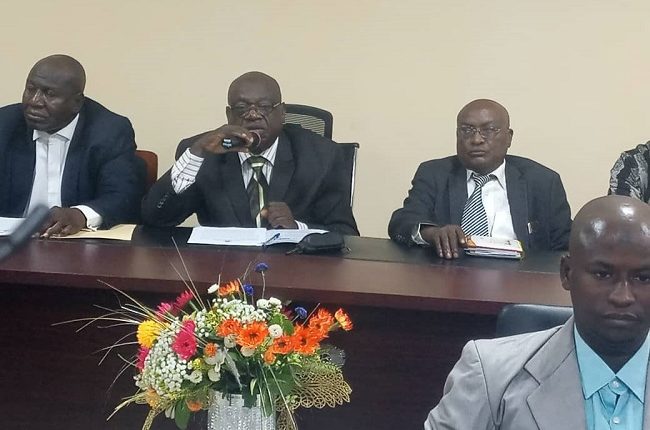 A pastor popularly known as Ugbala Solomon (Church withheld) has accused police officers attached with the defunct Anti Robbery Squad (SARS) of allegedly killing two of his members and alleged that they were kidnappers killed during an exchanged of gun fire with the police.

According to the pastor,  the defunct SARS invaded his church at Ezza Egu Community in Ezza North local government area of Ebonyi state when they were preparing for a program at the area.

Pastor Ugbala made this known while testifying before the judicial panel of enquiry headed by the Former Chief Judge of Ebonyi state, Justice Alloy Nwankwo that took place at the old government house Abakaliki, Ebonyi state capital.

The pastor alledged that the police SARS officers shot at the boys when they attempt to run away from their arrest and took their bodies and motorcycle away.

The clergy who noted that they have written to Department of AK and SARS urged the Judicial Panel to ensure that Justice is secured for their dead brothers.

It was gathered that the victims; Monday Oshim and Emeka Nwalobu Eze were killed following an alleged involvement in kidnapping a suspect, one Nonso who pointed accusing finger on them.

Ugbala noted further that “On Saturday, 6th day of June 2020, I was in our church organizing a place where people that will come for our programme will stay, when four Jeeps Conveying police men came behind and stopped.

“A boy called Nonso came out with handcuff and pointed to my youth leader called Monday Oshim and Emeka Nwalobu Eze. The police threatened to kill them if they run. As a result of the threat, they started running when the police gunned them down and carried their corpse and motorcycle to Abakaliki” he explained.

Reaction to the clergy allegations, the police defendants, Mr. Ceaser S.U and A .C Ndubuaku after a cross examination, said that the Pastor Solomon is a false witness who according to them has little or no knowledge about the incident but was bought over to come and give false witness against the police.

They added that the notice was not served on them on time but however appealed to the chairman of the panel to give them time to study the matter before appearing before the panel.

In his part, the Chairman of the Panel, Justice Alloy Nwankwo (Rtd) granted their Prayers in order to ensure fair hearing and justice to all parties involved and adjourned their sitting to hold on 23rd and 26th of November, 2020.

He tasked them to study the matter very well stressing that all due process must be followed and therefore solicited for their maximum cooperation in order to be fair to all the parties involved in the matter.