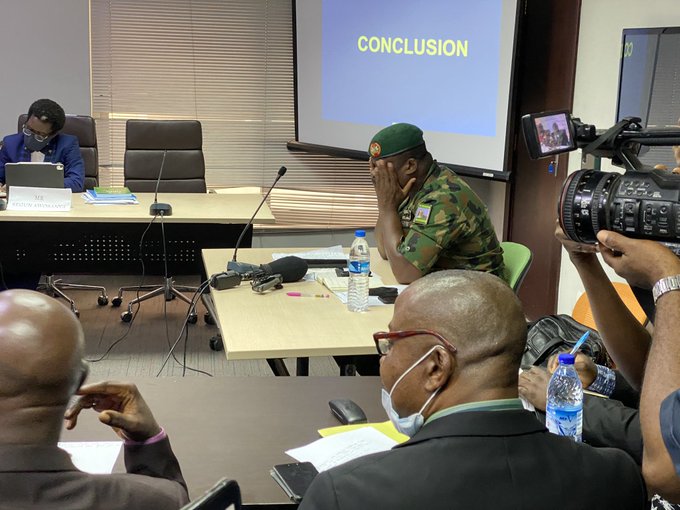 A brigadier general of the Nigerian Army, Ahmed Taiwo, says there were no gunshot wounds reported by any of the victims who were taken to hospital.

The Nigerian army is appearing before the Lagos panel to testify about the events during the Endsars and importantly what happened on the night of 20 October 2020, at about 6:50 p.m, WHEN members of the Nigerian Armed Forces opened fire on peaceful End SARS protesters at the Lekki toll gate in Lagos State.

The brigadier while appearing before the Lagos judicial panel on Saturday insists no one died and the officers fired blanks – and no gunshot wounds reported by victims .

The Nigerian Army submits noted that, it is a victim of a campaign of disinformation, insisting that some people take pleasure in defaming Nigeria for pecuniary reasons.

“It’s done by those seeking to drive a wedge between Nigerians and the Armed Forces”.

The military also not happy that Babajide Sanwo-Olu, governor of Lagos, denied inviting soldiers to restore peace and order in the state.

According to Taiwo, Sanwo-Olu called on the military for support on October 20, after the #EndSARS crisis degenerated into chaos.

Army says Lagos State listed curfew without informing them, and that this prevented them from completing stabilisation activities.

NewsWireNGR recalls that during his first major interview after the shooting, the governor who was on ARISE NEWS Channel, the broadcast arm of THISDAY Newspapers, denied ordering the army to the state, saying such powers is beyond any state governor.

He said: “I don’t know how the officers got it all wrong because the instruction was that police won’t be out until 10-10:30 p.m. when all citizens should have gotten to their various homes. This is totally against what we stand for.

“The army does not report to me, I have reported the matter to the highest command in the military. It’s not something we are going to gloss over. A judicial panel will be set up to investigate it. I have escalated it to the highest level of the military.”

According to Mr Editi Effiong, tweeting live from the proceedings Saturday, wrote that the Army had earlier shared a video showing soldiers offering water and soft drinks to protesters after the crowds were dispersed from Lekki toll gate Plaza.

“Army says blanks cannot hurt people. He digresses to say that babalawos who say they’ve fortified people usually fire blanks at them. Videos of burnt Circle Mall being displayed. Army says one of the businesses was burned because the Baale didn’t get a N200k bribe”. Effiong wrote in his narration.

Army says an extraordinary order was invoked to deploy graduating students of the Army Intelligence School the panel to guard duty around the city. Gen. Taiwo remarks that many of the soldiers have missed their weddings because they’re on extended duty.