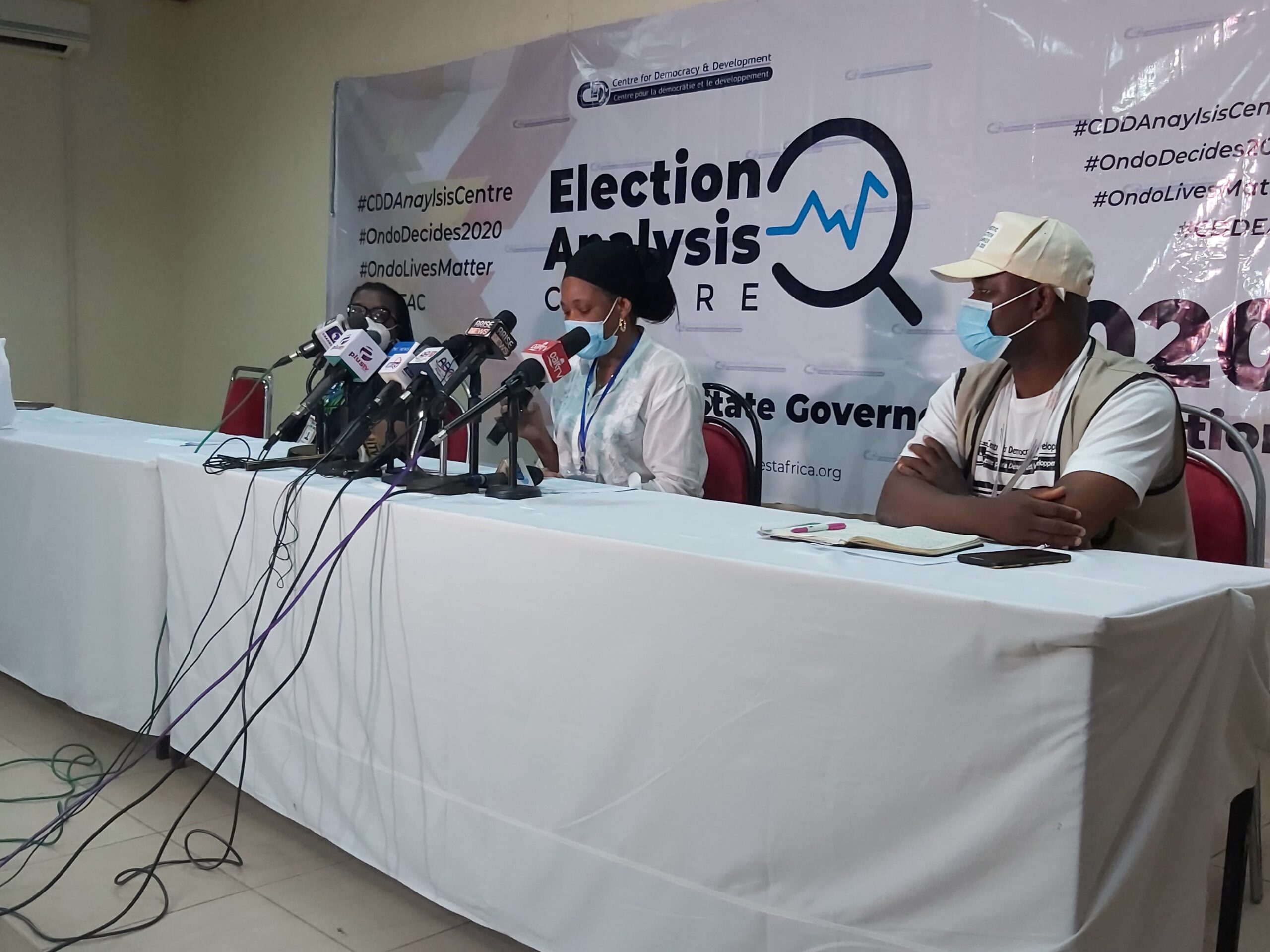 The holding of transparent, accountable and credible elections is an important cornerstone of the democratic process in any country, and election observation by civil society makes a significant contribution in the process.

Civil society represents a vehicle for popular participation and civic activism and that is one of the major areas the Centre for Democracy and Development (CDD) focuses on.

For over two decades, the Centre has been working towards enhancing Nigeria’s democracy through research and policy engagement.

At the Ondo State Governorship election in October 2020, The Centre for Democracy and Development (CDD) through its Election Analysis Centre kept an eye on the conduct of the poll and the level of adherence to key processes critical to ensuring a free, fair and credible election.

Deploying 255 trained and non partisan citizen observers to monitor the electoral process, CDD collated reports from those observers to produce a full assessment before and after the election.

According to CDD’s Director, Hassan Idayat; “there is a need to create a civil society network of volunteers at polling units dedicated to monitor and discourage vote-buying on election day.”

Through it’s Election Analysis Centre, CDD set up a situation room in Akure, the Ondo state capital where reports from observers on the field were filed and analysed. A key component of the situation room was the Fake News Desk where fact checkers and media researchers were engaged to immediately fact check social media reports in real time

During the elections, CDD’s fake news corner monitored social media updates and the team of dedicated fact checkers in collaboration with journalists on the field, immediately countered the misinformation and sometimes deliberate disinformation with the fact.

One of the most viral fake news stories on social media during the election was a video that claimed that there was violence in Owo, the hometown of Governor Akeredolu, and one of the victims from the clash was first lady, Betty Akeredolu.

CDD countered the disinformation using physical fact checks; made possible because CDD election observers were at the scene and could confirm that such an incident did not happen. A fact check report was also immediately written and published on NewsWireNGR

In a statement later given by the organisation, Director Idayat Hassan, said “we were present at the spot, so (we) could timeously debunk asides from using other fact-checking tools”

The Director also called for tougher actions to deal with the problem of vote buying, violence and fake news, which she said were ‘combining’ to undermine the sanctity of the vote.

CDD’s Election Analysis Centre, (EAC) chaired by Professor Adele Jinadu provided a platform for monitoring, research, data gathering and analysis. Launched in February 2019, the centre was put together with support from the MacArthur Foundation and other partners.

At the organisation’s post election press conference in Abuja, EAC head, Professor Adele Jinadu said “the CDD report about the election provided an account of its major findings, derived primarily from field data gathered by researchers and observers deployed for the Ondo election.”

These reports wouldn’t have been possible without the analysis centre.

One of the most important reports produced by the EAC was the preliminary report on the conduct of the Ondo state election, that drew attention to issues of security, vote buying and failure to adhere to COVID-19 protocols.

The Election Analysis Center report provided an account of CDD’s major findings, derived primarily from field data gathered by researchers and observers deployed for the election.

CDD believes that in order to expand its frontiers through citizen’s engagement, it is important to prioritize partnerships not just with other Think Tanks and mainstream civil society groups but also with the media.

One of CDD’s goals is to ensure that democracy delivers development and as Director Idayat Hassan says “what drives our engagement is the need to make governance works for all citizens.”