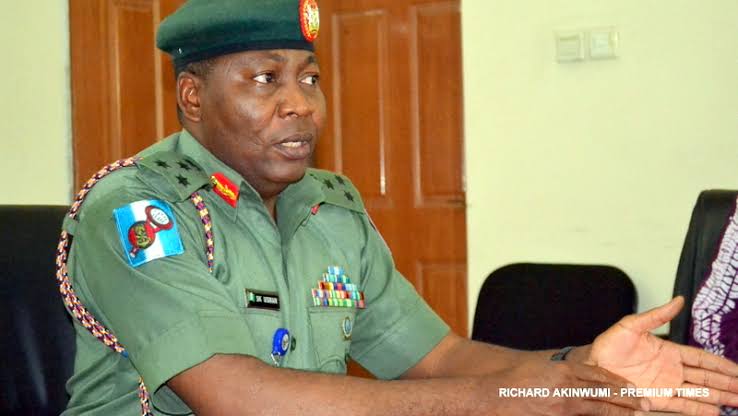 More than a week after shots were fired at unarmed peaceful #EndSARS protesters at the Lekki Toll Plaza in Lagos, a former Director Public Relations of the Nigerian Army, Brigadier General Sani Usman (rtd), has said blank ammunition was used to disperse protesters.

Sani Usman said this on Thursday during an interview on ARISE TV News.

According to him; blank ammo has little or no effect on its target. “If you look at the canisters, they were blank ammo and blank ammo don’t even kill. At a close range, – maybe 100-metres – maybe it will have some pigmentation on your skin,” said Usman.

“Remember the military are armed and by the nature of their training, they are trained to kill and I think the military in its wisdom instead of using live ammunition decided to use blank armour which is meant for training.

“I think they should be commended for that otherwise there would have been serious collateral damage, but they were professional enough to have done that.”

NewsWireNGR reports that the Global rights group, Amnesty International had on Wednesday released a timeline of the killing of #EndSARS protesters by soldiers at the toll plaza on October 20.

In the report, Amnesty International said its crisis response experts investigated and verified social media videos and photographs that confirmed that security forces were present at the scene when the shootings occurred. However, the presidency through it’s media spokesperson has disagreed with the Amnesty international report.

“Common sense would have told you that there was no hospital with the capacity to contain even 50 dead bodies or 100. This and many other spurious allegations have been going on against the Nigerian military by the Amnesty International,” he said.

Related Topics:ArmyLekki shooting
Up Next

In Zamfara, 21 killed by bandits