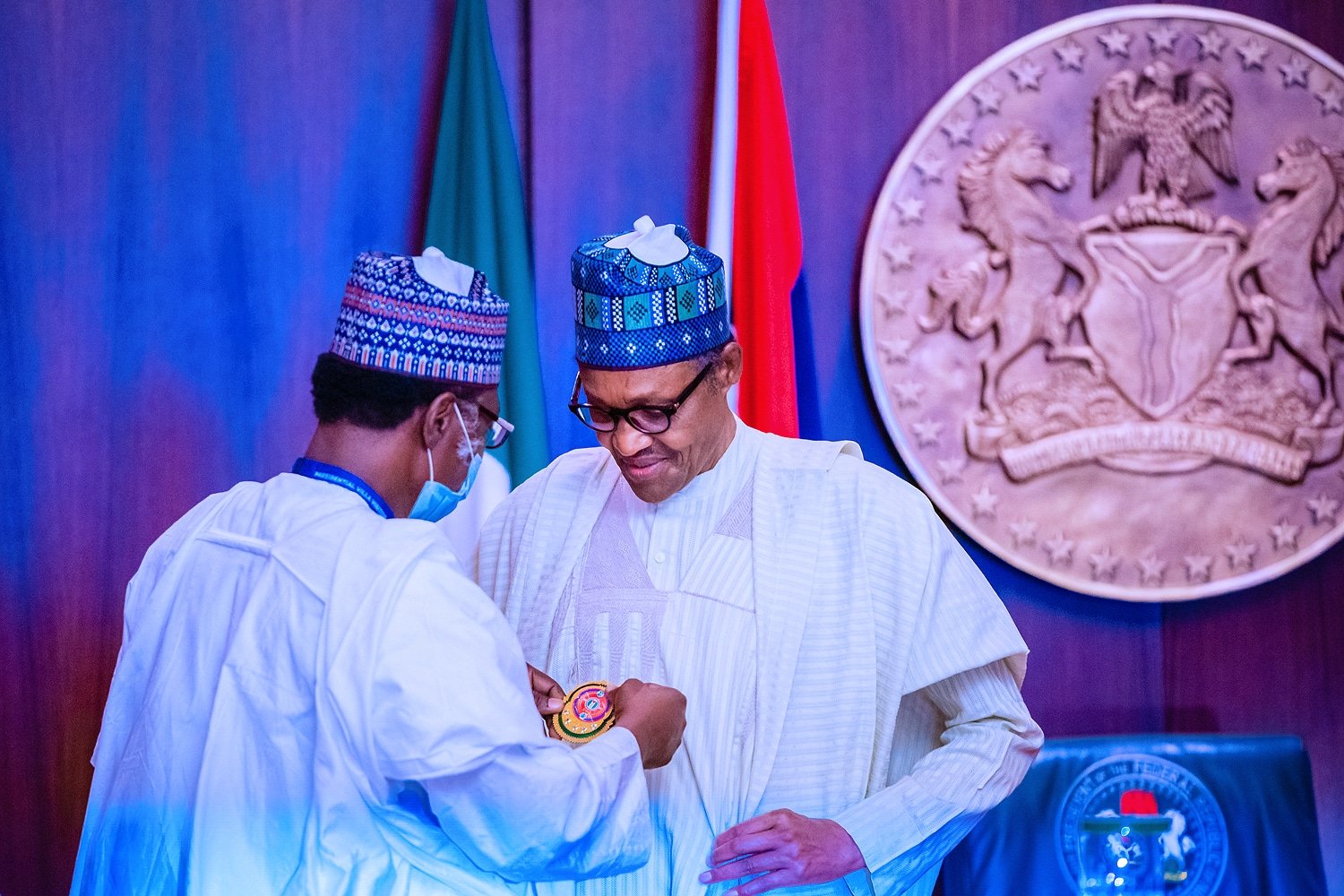 The short ceremony took place at the Council Chamber of the Presidential Villa in Abuja before the commencement of the 21st virtual Federal Executive Council (FEC) meeting on Wednesday.

He appealed to Nigerians to desist from actions and comments that could jeopardize the unity and progress of the nation.

President Buhari said this year’s occasion reminds Nigerians of the need to guard jealously the unity of the nation which was won at great cost.

The President, who stressed that ‘‘Nigeria’s strength lies in her diversity,’’ honoured the memory of the nation’s fallen heroes and veterans, recounting their sacrifices during the First and Second World Wars, the Nigerian Civil War and Peace Support Operations around the world.

President Buhari also paid tribute to men and women currently engaged in internal security operations, particularly the ongoing fight against insurgency, terrorism and armed banditry in some parts of the country, praising them for remaining steadfast in the difficult task of restoring peace and security despite the coronavirus pandemic.

”We honour the memory of our gallant officers and men who have paid the supreme sacrifice in order to keep the country united as one entity.

”The nation remains grateful for the efforts and sacrifice of the Armed Forces especially in the fight against insurgency and other internal security challenges confronting Nigeria.

”The Armed Forces Remembrance Day or Veterans Day as it is known in some parts of the world is an important event observed in commemoration of the end of the Second World War.

”In Commonwealth member countries, the Remembrance Day is observed on 11th November yearly.  However, for us the date was changed to 15th January annually to accommodate the commemoration of the end of the Nigerian Civil War,’’ he said.

On security operations in the North West and North Central zones in the country, President Buhari expressed delight at the return of normalcy in some of the areas that previously witnessed security challenges.

”Our dear nation has witnessed numerous security challenges since independence. These security threats have undermined Nigeria in the areas of trade, investment and economy, education, health as well as agriculture and frequently denied Nigerians the freedom of movement.

”I am however pleased to state that a lot has been achieved in the Internal Security operations in the North West and North Central zones where in addition to Operations LAFIYA DOLE, HADARIN DAJI, HARBIN KUNAMA, WHIRL STROKE, other operations such as ACCORD, SAHEL SANITY and KATSINA were successfully launched.

”This has led to the return of normalcy in some of the affected areas. However, all hands must be on deck to check attacks on soft targets,” he stated.

The President, who restated that his administration will continue to forge useful alliances with neighbours and friends in the international community for the total defeat of the security threats affecting the sub-region, promised to ensure timely provision of adequate resources and necessary logistics support for the Armed Forces.

President Buhari further pledged that under his watch the Nigeria Armed Forces will operate with the best modern warfare equipment, with welfare issues receiving utmost attention.

”We are quite aware that it is our responsibility to provide a conducive environment that is devoid of security threats.

”I want to re-assure Nigerians that security being one of the pillars of this administration will continue to be at the forefront until peace and security are restored in the country,’’ he said.

The President also used the occasion to reassure Nigerians of his administration’s commitment to creating an environment in which all citizens and foreigners are guaranteed freedom and returns on investments.

The President called on Nigerians and other residents in the country to procure and wear the emblems with pride in order to identify with those who laid down their lives for the peace and security of the county.

”I encourage all to donate generously in support of our veterans and dependents of our fallen heroes,” he said.

President Buhari announced a donation of N10 million to the Nigerian Legion.

Related Topics:BuhariArmed Forces remembrance
Up Next