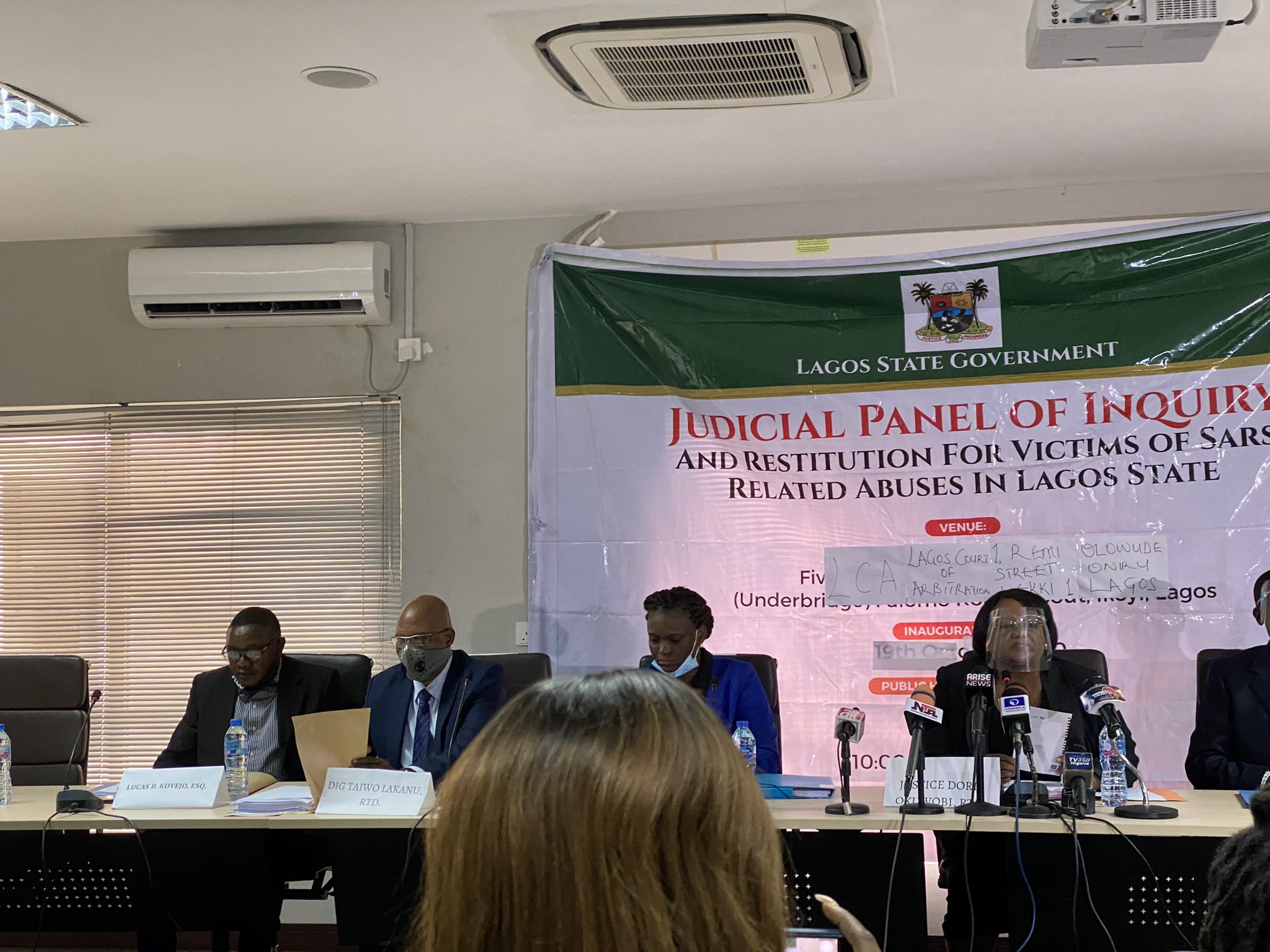 A judicial panel of inquiry set up by the Lagos state government to look into the cases of police brutality, extortion and other offences by the Special Anti-robbery Squad (SARS) has begun in Lagos with the first sitting held on Tuesday.

The panel started by looking into last week’s shocking events at the Lekki tollgate where a demonstration against police brutality went tragically wrong as soldiers allegedly opened fire on protesters.

Amnesty International and eyewitnesses say the military opened fire on peaceful protesters at the toll gate, killing at least 12 people.

The military has vehemently denied involvement in the shooting.

The Judicial Panel members are tasked with investigating happenings in the EndSARS protests, who shot protestors, who is affected, how much compensation they should get, and who should be prosecuted.

They will also investigate historical allegations of human rights abuses carried out by police officers of the now-disbanded Special Anti-Robbery Squad (SARS).

Tuesday’s proceedings were delayed for almost two hours as the youth representatives on the panel refused to sign an oath of secrecy, a dispute that was later resolved.

A man who testified at the judicial inquiry, Okoliagu Abudike, a father of five, sought justice for what he said was a 47-day detention in 2012 at the hands of SARS officers that came after his boss accused him of theft.

He said he bled profusely and lost two teeth as officers beat and tortured him, demanding he confess, and later took his car, generator and the deed to his house.

“My boss then told me that I was going to die there,” he said.

Despite a 2016 court ruling awarding him 10 million naira (more than $26,000), he said SARS paid nothing and did not discipline the officers.

After about 30 minutes of testimony and questions, the eight-member panel said it would rule on Abudike’s case within 7-10 days.

Another petitioner narrated how officers of the disbanded SARS tortured him and extracted two of his teeth after arresting him in 2014.

In his testimony, the man said that his property had been forcefully taken by SARS officers and the police had refused to pay him compensation despite a court order.

Another petitioner, A Mr. Ndukwe came in with his mother. He’s wheelchair bound; according him, having been injured by SARS.

ThecChairman however adjourned his case to 03/11/2020 to allow the Commissioner of Police attend the proceedings.

His mother showed journalists a photo of the officer who tortured her son.

Independent investigations into police abuses were a core demand of the protesters who rallied across Nigeria for more than two weeks.

The chair of the panel, Justice Doris Okuwobi had said the panel was independent of the government and would ensure justice for victims of police brutality and “for those affected by the unfortunate incident of the shootings by the military.”

One of the attendees of the sitting, expressed his disappointment at the youth representatives on the panel.

The Independent investigations and judicial panel were a core demand of the #EndSARS protests. The Chair of the panel, Justice Doris Okuwobi however said the panel has yet to receive complaints from the shooting.  The panel will sit for six months.

Court rejects EFCC’s request for an arrest warrant for Diezani

2 years after, judge throws out case against 57 Lagos men accused of homosexuality