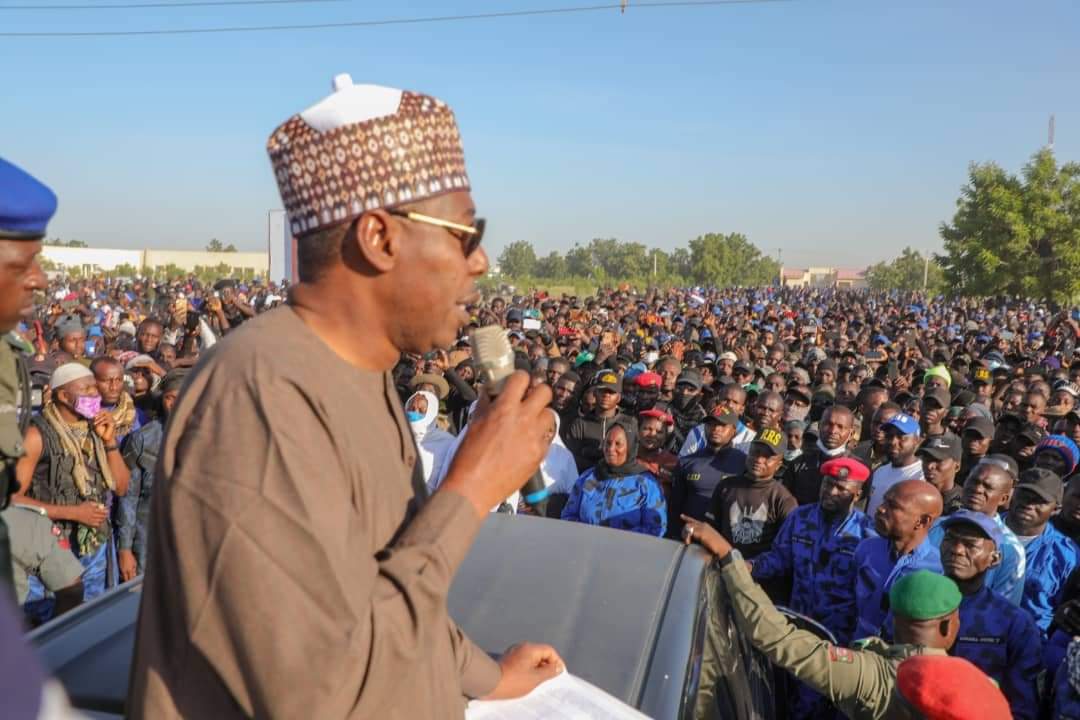 Borno State Governor, Babagana Zulum has approved government scholarship for children, most of them orphans, whose fathers were volunteers amongst Civilian JTF, hunters and vigilantes killed at battle fronts while fighting boko haram in the last seven years.

Zulum also flagged off a welfare package of N50,000 each for widows of killed volunteers and the distribution of N180m and 27,000 bags and cartons of food variety to 9,000 volunteers.

The Governor announced all the interventions made on Wednesday in Maiduguri, while addressing a gathering of about 9,000 volunteers who have been fighting alongside the Nigerian armed forces to contain Boko Haram insurgency in Borno. The volunteers were gathered at the campus of Borno state University.

Each of the 9,000 volunteers is to receive 20,000 naira cash, a 50-kg bag of rice, a carton of spaghetti and a gallon of cooking oil, all of which were outside their regular monthly allowances.

Read the full text of his address titled ‘Why owe families of CJTF, hunters killed in battles’ below:

For me, the greatest miracle that has emanated from Borno State within the last ten years, is the emergence of the Civilian JTF back in 2013, and the coming of more volunteers from hunters and vigilantes, all of whom have devoted their lives to fearlessly and patriotically fight side by side with soldiers and other armed forces, in the battle for Borno’s liberation from Boko Haram.

Of all the components of persons who make up the Borno society today, for me, there is no group that is as important and as critical to us as the brave men and women gathered before us today, who have given up their basic and entitled needs for safety and comfort so that millions of fellow citizens can be safe and comfortable.

Our indomitable men and women of the civilian JTF, hunters and vigilantes, the people of Borno State are mightily and gratefully proud of each of you. Nothing can compensate for the sacrifices you are making, only Allah can adequately compensate each of you. This is particularly so for many of our fellow compatriots who have died in the battle fields.

In the last seven years, we have recorded instances in which volunteers in the civilian JTF have intercepted suicide attackers and in the process lost their lives. We have recorded more instances of many killed in major battles after they also succeeded in our shared victories over Boko Haram at different encounters. I will not mention names, but there are records of warriors in the Civilian JTF, hunters and vigilantes from Southern, to Northern and Central Borno, who fought so hard and gave their lives fighting for Borno.

These volunteers fought and died with no death benefits, no pension, and no gratuities. As we should expect, orphaned children and widows left behind by these fallen Civilian JTF and hunters have been struggling whether to feed, to access medical services, or to access basic and secondary education.

As Governor of Borno State, I assure you, that insha’Allah, all of those who died in the Civilian JTF, groups of hunters and vigilantes did not die in vain. Bi’iznillah they have all died for the causes of saving humanity and we pray that Allah grants them His eternal mercy and admit them into aljanna firdaus.

While we continue to pray for them, as a people, we all have obligations to support the orphans and widows left behind by these fallen heroes of Borno.

It is my honour to hereby announce that Borno State Government will award education scholarship to the most vulnerable orphans of Civilian JTF who have been killed at battle fronts.

This scholarship will be awarded in phases, starting with the youngest and most vulnerable families of the earliest fallen volunteers, down to the most recently killed.

I will, insha Allah, constitute a multi-stakeholder committee which shall thoroughly evaluate vulnerabilities, come up with a list of children to benefit in the first phase, recommend schools, and develop a feasible and sustainable structure of the scholarship. The committee will be tasked with securing admissions, uniforms, fees and monitoring the academic progress of the children.

The parents of these children died fighting for all of us, the people of Borno State, the very least we can do is work towards the future of their children.

For widows left behind, we shall today release some social intervention packages to them, especially food.

I assure you all that we recognize and value the priceless contributions made by those who have died and those of us gathered here, whom we pray that Allah should continue to protect at the battle field.

The State Government will be releasing social intervention to all of you gathered here. We will be releasing packages of food items through sector leaders for Civilian JTF, and representatives of groups for hunters.

Insha’Allah, we will continue to make efforts to support all of you in any way we can, within the limit of scarce resources and competing demands.

On behalf of the Government and the people of Borno State, I once again register our profound appreciation to all of you and to our fallen volunteers.

To all citizens of Borno State, I urge us to continually reflect on our challenges in Borno State, and to remember at all times that while some societies may have the liberty to engage in certain characters, Borno already has more than enough problems.

We should continue to appreciate the fact that no matter how worried our current situation is confronting us, the evidence before us is that, the Buhari administration has made significant progress when compared with our past experiences before 2015. As an academic, I work with evidence. We all know what Borno was before Buhari, and what it is under Buhari.

It is however human nature for us to be more concerned with today’s realities than experiences of the past. Nevertheless, as experience has shown, it is the past that shapes today, and the future. We must look back to where we came from, and in the midst of challenges and emotions, we must be fair to recognize progresses made.

We must appreciate the Nigerian military, police, DSS, and the paramilitary for all their sacrifices, and I urge all citizens to continually accord them maximum cooperation and pray for them.

The people of Borno are known to be grateful yet realistic and fearless. Let us remain in our orderly and best behaviours, support our soldiers, other armed forces and volunteers, and continue to pray that Borno regains enduring peace and prosperity.

Related Topics:BornoJTFGovernor Zulum
Up Next

Returning looted goods may not save you from prosecution -Police say