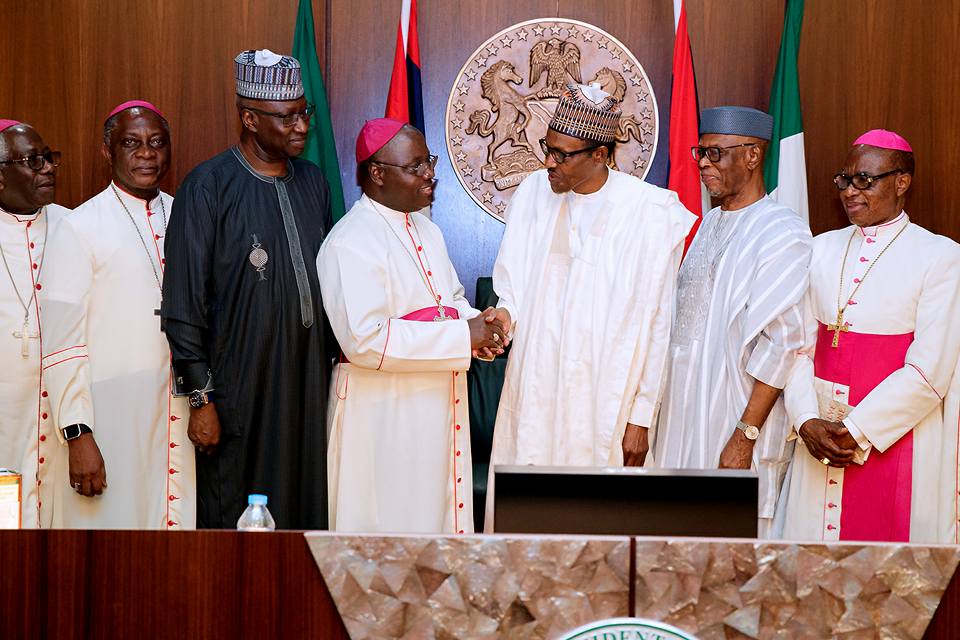 Catholic Bishops in Nigeria have endorsed the #EndSARS protests going on across the country.

The Bishops said the protest was an accurate representation of the problem in the country and was morally justified.  They advised the concerned youths to avoid any form of violence during the protests.

Their statement issued Saturday and made available to NewsWireNGR comes shortly after the General Overseer of the Redeemed Christian Church of God, Pastor Enoch Adeboye, also endorsed the protests against police brutality which have been ongoing across the country for over a week.

The statement signed by Most Rev. Augustine Obiora Akubeze, President of Catholic Bishops Conference of Nigeria (CBCN), said many lives had been wasted through unnecessary brutality and wrong application of force.

The clerics demanded justice for all victims of SARS brutality and police brutality and a review of the welfare of the policemen who have poorly been deprived by the system.

Part of the statement read, “Thus the cries of our children protesting against the brutality of SARS that manifests in extrajudicial killings, unlawful arrests, profiling of youths as criminals, the invasion of youths privacy by searching phones and laptops without any warrant or any just cause, and the incarceration of many of the youths in the SARS custody without trial.

“We the members of the CBCN have followed the protests with keen interest and call on the Federal Government of Nigeria once again to listen to the cry for justice so that peace can reign in our country. The protests seem to have a life of its own, and it is spreading all over the country; this shows that most Nigerians are facing the same oppression and brutality inflicted by the SARS.

“We urge the Federal Government to fulfil its primary constitutional responsibility of securing life and property of every Nigerian and provide opportunities for our children to realise their God-given potentials.

“The audacity and impunity with which the SARS officials have been operating all the while is a manifestation of the failing state of Nigeria. Various bodies and patriotic Nigerians have expressed the opinion that just ending the SARS would not solve the enormous problems of Nigeria, because it is futile treating symptoms of a disease when the root cause is known.

“We reiterate that restructuring this country is a desirable path to be towed given the various developments in this nation. The knee jerk reaction of the administration by abolishing the SARS and setting up the Special Weapons and Tactics (SWAT) team portrays either the absence of an understanding of the entire problem or a lack of sincerity to address the issue.

“The Nigerian Government must realise that what the youths, on behalf of Nigerians, clamour for under the code name #EndSARS is a comprehensive reform of the entire Police Force and not a change of name; they call for a reform of all our government institutions and a reform of the entire nation. They are asking for a system that will be hard on crimes and criminals in the society within the ambience of the law, while at the same time treating every human being, citizens and visitors alike, with respect and dignity.”

“EndSARS goes beyond the SARS, and it is morally justified. We support the youths who have taken this step, and we caution that they are allowed without any intimidation to exercise their right to peaceful demonstration and should not be provoked or incited to violence.”

The #EndSARS protests, which trended as number one globally on Twitter, was triggered by incessant cases of brutality and human rights violation by SARS, a unit of the Nigeria police force which was recently disbanded.

The protest, which started in Lagos and Abuja last week, has spread to many parts of the country and even beyond.

Although Mohammed Adamu, Inspector General of Police, announced the disbandment of SARS, a new unit named Special Weapons and Tactics (SWAT) team was created to replace the defunct squad.

But Nigerians have condemned the creation of the new team, saying it is a renaming of the disbanded unit.

The Nigerian Government had promised on multiple occasions to reform SARS and make the squad more accountable but failed to fulfil that pledge.