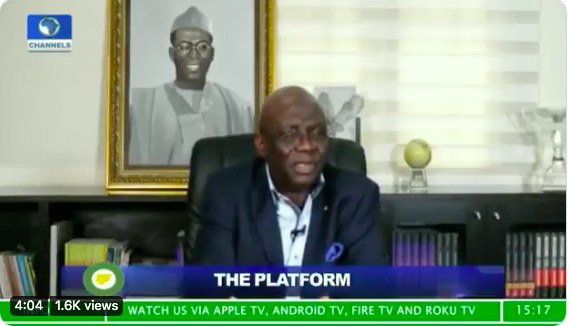 Pastor Tunde Bakare of the Latter Rain Assembly Church, on Thursday said he and others who staged a protest against the then administration of Doctor Goodluck Ebele Jonathan shortly after fuel subsidy was removed did not campaign against subsidy removal.

Occupy Nigeria was a socio-political protest movement that began in Nigeria led by members of the Save Nigeria Group, on Monday, 2 January 2012 in response to the fuel subsidy removal by the Federal Government of President Goodluck Jonathan on Sunday, 1 January 2012.

Bakare who disclosed in an interview on The Platform aired on Channels TV and monitored by NewsWireNGR, said Nigerians who continue to question the whereabouts of the Save Nigeria Group since the administration of President Muhammadu Buhari removed petroleum subsidy should start their own groups.

The cleric spoke at The Platform, an annual conference organised by Covenant Christian Centre in Lagos, on Thursday.

“I did not campaign against subsidy; I campaigned against oppression of the poor. Don’t kill Nigerians, kill corruption because the knew that the subsidy was going into private pockets” – Pastor Tunde Bakare.

“Is there anywhere that is written in the constitution of the Federal Republic of Nigeria or in the Bible or in the Quran that whenever there is crisis in Nigeria, it is Bakare alone that must march?” he stated.

NewsWireNGR recalls that the Save Nigeria Group led Occupy Nigeria Protests took place across the country, including in the cities of Kano, Ojota ( -part of metropolitan Lagos ), Abuja, Minna, and at the Nigerian High Commission in London.

After the 2019 Nigerian general election, Bakare who stated that he would run for president after the expiration of Muhammadu Buhari‘s second term in 2023 added that, “My Job is not to be voice to the voiceless, our job is to restore a voice to the voiceless and guess what? a people that will not fight for themselves, will not lift a finger for themselves, let them solve themselves out too”.

“So others who are saying where is Save Nigeria Group, start your own, when it is time to moved and God tells us to move, as obedient servants we move – we dont do these things just to impress people”.