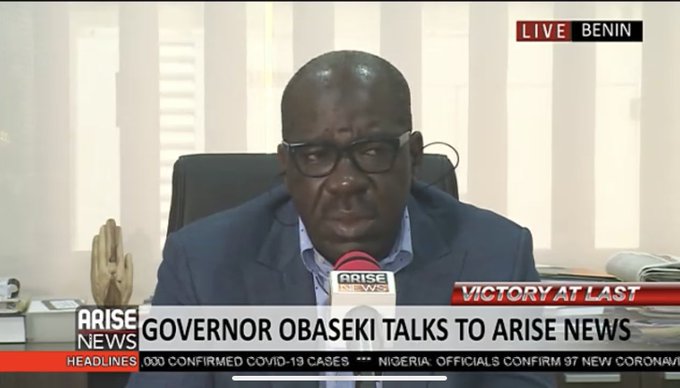 The Edo State Governor, Godwin Obaseki has said the former National Chairman of the All Progressiives Congress, APC, Comrade Adams Oshiomole and the National Leader of the APC, Bola Ahmed Tinubu constitute a threat to our democracy.

Speaking On Arise Television flagship show early Tuesday, monitored by NewsWireNGR, the Governor who won his re-election under the platform of the Opposition Peoples Democratic Party on Saturday, said both Tinubu and Oshiomhole, tried to “overlord themselves over people that have constitutional authority.”

According to the Independent National Electoral Commission (INEC), Obaseki polled a total of 307, 955 votes to defeat All Progressives Congress’s Osagie Ize-Iyamu who got 223, 619 votes.

The Governor, a former benefactor of Oshiomhole and ally during his first term in office said, “Tinubu and Oshiomole are not constitutional actors. I was surprised when I was in the APC, that someone was described as party leader. It is out of respect, but it does not give constitutional roles”.

NewsWireNGR recalls during the run up to the elections, the National Leader of the APC had not only issued a statement endorsing the party’s candidate, but also delivered a widely seen video calling Governor Obaseki undemocratic and asking electorates in Edo State not to vote for him.

The Governor however added, “if Oshiomhole continues to be destructive, we will not have mercy on him” –

“You don’t have to be a crook or a fox to be a politician. You can be a normal, straight forward person and be a politician. We must remove the ideology that politicians are akin to people that do 419″… He added.

Meanwhile, Mai Mala Buni, chairman of the All Progressives Congress (APC) caretaker committee, has congratulated Godwin Obaseki on his reelection as governor of the state.Advertisement

In a statement on Monday, Buni commended the Independent National Electoral Commission (INEC) and all the political parties that participated in the election.

The chairman said the APC is committed to free and fair elections “in order to strengthen the foundation for our political and moral authority”.Advertisement

“The September 19, 2020 Edo State Governorship election is over, the winner has been declared by the Independent National Electoral Commission (INEC) in the person of Mr. Godwin Obaseki, candidate of the People Democratic Party (PDP),” he said.

“We hereby congratulate the winner of the election, the people of Edo State and all Nigerians. The peaceful conduct of the election and its outcome represent victory for Nigeria’s democracy.

“As a party, we join our leader, President Muhammadu Buhari GCFR, to affirm our ‘commitment to free and fair elections’ in order to strengthen ‘the foundation for our political and moral authority’.

“We, in particular, want to salute our candidate in the election, Pastor Osagie Ize-Iyamuh for his tenacity and leadership. We similarly commend our Edo State leaders, especially our immediate past National Chairman, Comrade Adams Oshiomhole and all our members in Edo State for demonstrating unwavering support for our party and our candidate in the election. In the face of all the challenges, we collectively remained faithful and worked tirelessly during the campaigns.”

The Yobe governor appealed to Nigerians to unite and deepen the country’s democracy, adding that an end must be put to situations where elections are seen as war.

“We urge our candidate and all our members to join us in congratulating Mr. Godwin Obaseki and the PDP, being the declared winner of the election,” Buni said.

“Our attention must now shift to Ondo State and ensure that we win the October 10, 2020 election. September 19, 2020 Edo election should present a new watershed. We will work hard to win the Ondo election.”

Ize-Iyamu had said he was still studying the election results and would announce his next move soon.