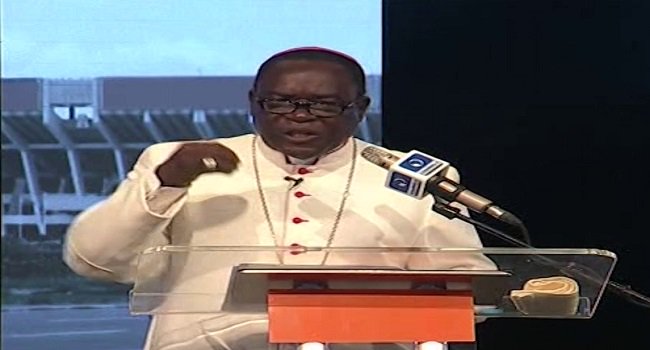 The Catholic Bishop of the Sokoto Diocese, Reverend Bishop Mattew Kukah, has commended the people of Edo State for their conduct during the state’s governorship election on Saturday.

According to him, the people have left a legacy of efficiency which the entire country can emulate.

“The way they conducted themselves and I think in every sense of the word, they left us a legacy of efficiency,” he said on Tuesday during an interview on Channels TV’s Sunrise Daily.

The bishop who is also a member of the National Peace Committee, also commended the Independent National Electoral Commission, security agencies and civil society groups for their roles in the election.

“We worked very closely with INEC and I must commend the INEC chairman for his incredible leadership, zeal and enthusiasm.

“The Inspector-General of Police kept to his word on the promises he made to the people of Edo State and to the peace committee.

“Our commendation also goes to the people of Edo State. I have received quite a lot of messages from old friends that I haven’t spoken to in a long time, commending the work of the National Peace Committee but really this is not an honour that one individual should take.

“It is the people of Edo State, the way they conducted themselves,” he said.

Speaking generally about the political atmosphere in other parts of the country, he lamented that Nigeria is currently not practicing a democracy.

“What we are practicing in Nigeria, it’s just theoretically we answer the name democracy but in reality, what we are dealing with is a feudal system that is tied to agencies and ideologies that have got nothing to do with a democracy.

“When last did you see a politician across Europe which we are trying to imitate go and bow to the queen or king or seek blessings from a bishop. We have too many intervening variables that are confusing the narrative.

“We are really not practicing the principles of democracy and it lies in the fact that only those who have money can hope to be voted into power.

“If you feel you need to be anointed to ascend to power then we are running a theocracy”.

Just In: INEC presents certificates of return to Obaseki, Shaibu