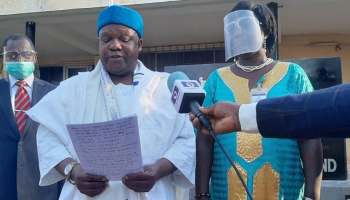 Former Deputy Governor of Central Bank of Nigeria, CBN, and social commentator, Dr. Obadiah Mailafia, was late yesterday, released after close to hours interrogation by the officials of Department of State Services, DSS, in their office in Jos, Plateau State.

Vanguard Newspaper reports that Mailafia, who has been having running battle with security operatives in the wake of the claim he made last month that a serving governor from the north is a commander of the Boko Haram sect.

Mailafia, who arrived the Jos office of the DSS around11 am, did not regain his freedom until about 2.50 p.m, when he emerged into the waiting embrace of his sympathisers who had thronged the DSS office.

Speaking with journalists after his release, he commended the DSS officials for their professionalism in the discharge of their duties, saying DSS exhibited high sense of professionalism in the way the operatives handled the matter as was not maltreated or intimidated in any guise, but urged them to ensure that this should be the last invitation to him on the issue.

Earlier before he entered the premises of DSS, the former CBN deputy governor had said: “I am ready to perish for speaking the mind of millions of Nigerians over the incessant killings of innocent citizens going on currently in the country.

“I don’t know why I have been invited again, this is the third time that they invited me to their office and I honoured them. There have not been any instances that warrant any crisis in the country after the interview, which I granted a radio station in Lagos. Once again, they have invited me, so as a law-abiding citizen of this great country, I honourably honoured their invitation.

“Let me say that this has nothing to do with politics, I spoke in the interview as a citizen of this country who loves the people of this country. I am the voice of thousands of voiceless people. Thousands of innocent people have been killed in this country in Borno, Yobe, Adamawa, Katsina, Kaduna, Niger, Southern Kaduna, Benue and Plateau State where we are today. I am the voice of the holy martyrs and if I perish, I perish.”