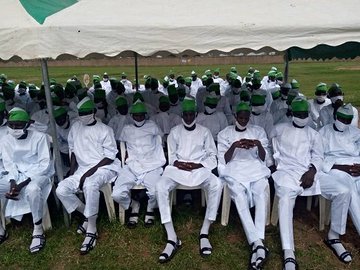 Ali Ndume, senator representing Borno south, has kicked against the re-integration of former Boko Haram insurgents into the society.

The senator said granting amnesty to the former insurgents would not bring the “required peace” in the north-east.

In 2016, the military launched Operation Safe Corridor, an initiative for the deradicalisation and rehabilitation of former Boko Haram fighters.

Speaking with journalists at the weekend in Abuja, Ndume said the military ought to keep these former insurgents as “prisoners of war.”

“The war must be over before we start doing that. The military could open up the corridor, allow everybody to enter and start profiling them and keep them somewhere as prisoners of war and train them,” he said.

“The current arrangement where the repentant insurgents are granted amnesty without apologizing to the victims and the state cannot bring about the required peace.”

The legislator said despite the challenges confronting the military, the soldiers deployed in the north-east have been wonderful.

Using Ngoshe as an example, Ndume said the soldiers have begun helping the locals rebuild their community that was destroyed by the insurgents.

“At Ngoshe for instance, the military personnel there, apart from repelling the attacks from the insurgents, have mobilized resources to start rebuilding, through direct labour, houses that were destroyed by the Boko Haram fighters,” the lawmaker said.

“I am the voice of the holy martyrs, so if l perish, l perish” – Dr. Obadiah Mailafia during visit to DSS