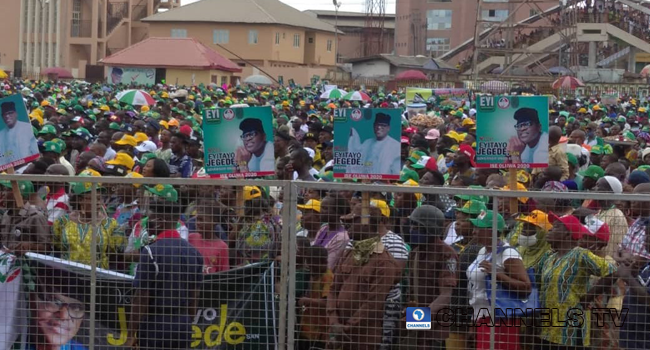 Channels Television reports that the PDP’s candidate for the election, scheduled to hold on October 10, is Eyitayo Jegede.

Supporters thronged out in their numbers to the MKO Abiola Democracy Park in Akure where the rally was held.

The Executive Governor of Sokoto State, Aminu Tambuwal, was also present at the rally to stand in solidarity with Jegede, as well as PDP National Chairman, Uche Secondus, who presented the party’s flag to Jegede.

Representing Vice President Atiku Abubakar at the flag off was Segun Sowunmi.

“They (APC) said you should vote them because they want Presidency to come to Yoruba land,” Makinde said during his speech, which was, as much of the rally, punctuated by short bursts of political music.

“This election is not about the presidency to Yoruba land. This election is about delivering Eyitayo Jegede and putting Ondo state as part of the states that will lead the charge to restructure Nigeria.”

Makinde, who is also the party’s Campaign Council chairman for the election, drew a comparison between his election in Oyo and the impending Ondo version.

Makinde won the Oyo elections in 2019 despite contesting under the PDP, which didn’t hold political sway in the state at the time, or at the federal level.

“We have people, and we have God,” he said. “In Ondo State, you have God and you have people. It happened in Oyo state, it will happen here.”

In his remarks, Tambuwal said the APC, the current ruling party in Ondo, was in disarray up to the national. “APC is not a choice for Ondo state,” he said.

Jegede will battle with incumbent Governor Rotimi Akeredolu of the APC and others in the October 10 election.

“This governor does not like the Igbos” – Imo Governor, Hope Uzodinma in Benin, wants Igbos to vote for APC and kick Obaseki out