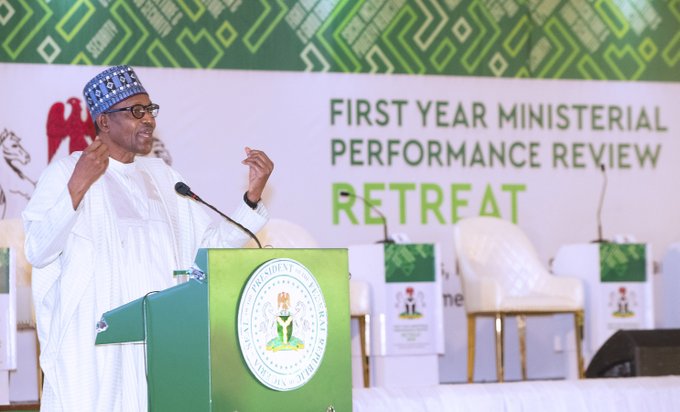 President Muhammadu Buhari on Tuesday listed the rehabilitation and reintegration of repentant Boko Haram terrorists into the society as part of the achievements of his administration.

Speaking at the closing ceremony of the one-year ministerial performance review retreat in Abuja, Buhari said the government was doing its best in carrying out its mandate especially with regards to fighting corruption.

He said he had done more with little resources compared to the previous administrations when oil sold at a higher rate.

He said, “We have also worked to address emergent cases of insecurity and insurgency in the country with innovative approaches such as “Operation Safe Corridor,” which de-radicalise, rehabilitate and reintegrate willingly surrendered Boko Haram members into the larger society. Our security operations in the Niger Delta, North Central and North Western states are yielding desired results. We hope to get rid of bandits, kidnappers and other criminal elements in these regions.”

The President added that contrary to what obtains when he was military head of state when people were detained at will, he was trying to follow the system in fighting corruption.

The military had in 2016 launched Operation Safe Corridor, an initiative for the deradicalisation and rehabilitation of ex-Boko Haram members.

The aim of the operation, the military had also said, was to reintegrate repentant Boko Haram members into society.

In July, 602 ex-Boko Haram members were said to have completed a de-radicalisation, rehabilitation and reintegration programme.

Lagos Electricity Board to expand energy services across the state