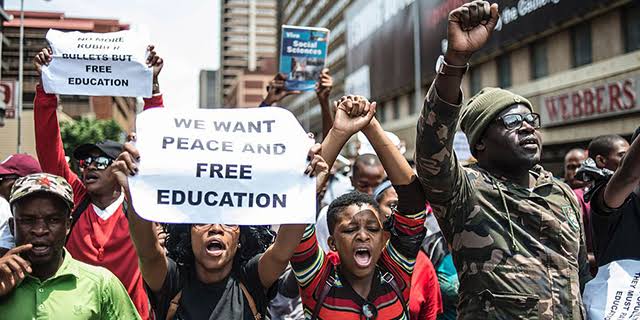 The Buhari administration has ruptured the ceiling of liberties it enjoys. Like King Solomon in his last uneventful years, the government has compounded the yoke of the people with the rocketing of the prices of essential commodities. It appears the administration has lost its sensory organ and has become insentient to the ‘’wailing’’ of citizens. And like the Israelites in the twilight of a failing Solomon rule, Nigerians are seeking another ‘’messiah’’.

Just five years ago, President Muhammadu Buhari made overtures of blunting the economic perils Nigerians endure. He seduced citizens with the promise of humbling the dollar and arresting the price of petrol. Buhari once famously said: “Who is subsidising who?’’ This was in reaction to the fuel subsidy controversy and the intransigent price of petrol.

Initially, the president was very unequivocal about retaining the price of petrol. On different occasions, he insisted that the price of the product will not be increased to attenuate citizens’ burden. Perhaps, he did not understand the economics of the oil industry or he was just making political statements. Also, it could be that his genuine intentions do not dovetail with the realities of the oil market – this rests solely on ignorance.

Nigerians took to the streets in January 2012 when the Jonathan administration announced a hiked petrol price. The mass action wore on for weeks. Some of the appointees of the Buhari government were the dramatis personae of that protest. The Buhari campaign seized the citizen angst and deployed it for political advantage in 2015. There were posters of Buhari promising to slice the price of petrol to N87 from N97. Today, the price of the product is about N160 per litre in the retail market.

Really, I submit to allowing market forces govern the price of commodities – in deference to the principles of a market economy. I also believe that the fuel subsidy regime deserved to be couped and banished. It was an egregiously corrupt system. However, my grudge against the current administration and I think that of many Nigerians as well is its insincerity. The government was never honest about its intentions; all its promises were just a gambit. And it has reversed itself in plethora of pledges and aborted its contract with citizens.

Also, these are perilous times for Nigerians. Citizens have been negatively impacted by the COVID-19 pandemic. Unemployment rate is at its highest – 27.1 percent — and businesses are shutting down and furloughing workers. Who will bankroll Nigerians? It is a contradiction, that while the prices of commodities soar, there is no form of safety net for citizens. Yes, while we allow market forces to play, it is the duty of the government to protect citizens from the crushing effects of this free-for-all – as it is the case in other market economies.

But instead of frontally addressing the economic fallout of the pandemic, the government busied itself with programmes such as — feeding school children at the waning of the lockdown – in which over N500 million was wolfed down. Let us even assume that the children were even fed, have their hunger pangs ceased? Were they given the bread of life? This is simply deodorising a problem instead of surgically attacking it. Lack of access to jobs, education, and growth opportunities foregrounds poverty and hunger.

And while the government was administering the “COVID-19 lottery”, its agencies were going after Nigerian businesses which ordinarily should be protected from the perils of the pandemic. NIPOST announced a new licensing regime for the post and delivery sector, mandating businesses to renew their licence with N20 million. The agency backed down after an outcry by citizens, but this does not obviate the general insensitivity of the government.

A thinking government will identify real businesses (especially SMEs) afflicted by the pandemic and intervene seminally; not this conjuring by the ministry of humanitarian affairs. It is even more complex when the government cannot aggregate the data of businesses needing a lifeline in the country. The economic interventions by other governments in countries in the throes of similar health crisis have been heavily on SMEs.

But instead of protecting businesses, the government is over-burdening them with taxes and tariffs in the heat of a meltdown effectuated by COVID-19. Nigerians need a stimulus not asphyxiation. What has the administration done for Nigerians and their businesses this period? This is the reason for the pushback and outrage over the electricity tariff and petrol price hike. To Nigerians, the government would rather tax than help them through a rough patch.

Really, it appears the response of the government to the concerns of citizens is tax and tariffs. Even if the price hikes are natural, the question still is, what is the government doing to protect Nigerians, especially the poor? I believe Nigerians will pay whatever tax or price there is to pay, if there is an enabling system for their business to thrive and opportunities for jobs and growth.

The concomitant effect of the petrol price hike is the ballooning of the price of foodstuff and other essentials. This is why Nigerians are wailing. If there was a means to afford an adjustment in their lifestyles or living conditions, they would not be railing against it. No job, no business and no medium of survival. How do you extract a toll from a broke man? He can only pay with his blood – and that is by a revolt.

The Buhari administration has failed to “bankroll’’ Nigerians where it matters. Instead of spreading prosperity, it is promoting and perpetuating poverty. The administration will remain an asymptote of hypocrisy and deception long after it is gone.

Fredrick Nwabufo is a writer and journalist

Related Topics:Fredrick Nwabufo
Up Next

Opinion: Will health precautions affect the integrity of Elections in West Africa?