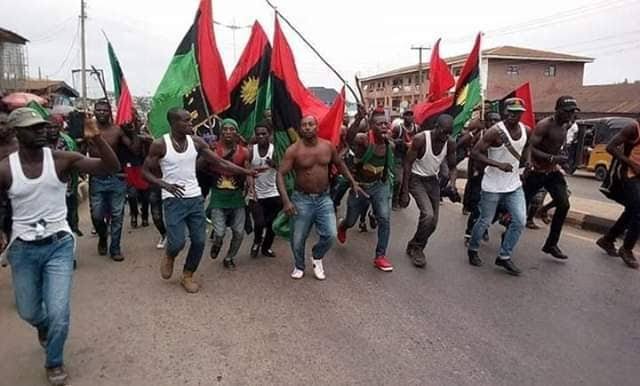 The Nigerian Police Force, has described what it called an “unprovoked violent attack” on DSS operatives by outlawed Indigenous People of Biafra (IPOB).

According to a statement by Police spokesperson, Enugu state command, ASP Daniel Ndukwe, the attack carried out in Enugu led to the death of two of people

Following credible information received on 23/08/2020 at about 0830hrs that suspected members of the proscribed Indigenous People of Biafra (IPOB) numbering over five hundred (500) had gone on rampage, blocking and burning tyres on the road, after abducting Operatives of the Department of State Security (DSS), the Commissioner of Police, CP Ahmad AbdurRahman immediately deployed Operatives of the Command, led by Enugu Metro Area commander, to rescue the adopted Operatives and restore normalcy.

On getting to the scene, the Operatives, who were joined by those of DSS, Army and Air Force, came under serious gunfire attacks by the hoodlums. They responded and in the ensuing gun duel, two of the hoodlums were gunned down, while some of them escaped with bullets wounds.

The Operatives successfully restored normalcy and rescued one of the DSS Operatives, who were at the said school to disperse the hoodlums from their unlawful assembly, while two (2) others were found lifeless in the scene and later confirmed dead.

Five (5) members of the group were arrested and they confessed to being members of the proscribed IPOB, and had gone to the school to hold a meeting and be trained in martial act and self-defense skills. Machetes, cut-to-size woods with nails affixed, phones and other items were recovered at the scene. 5

Meanwhile, before getting to the scene, the hoodlums had macheted and gruesomely killed a young man, set another ablaze, while also attacking Police personnel resident in the area.

To this end, the Commissioner, while warning that acts of rebellion by persons and/or groups (including the proscribed IPOB) capable of truncating the peace and tranquility enjoyed in the State will not be tolerated, made it clear that perpetrators will be made to face the full weight of the law.

He further warns hospitals and medical service providers against rejecting anyone seeking medical attention from bullet wounds. But they should treat and duly notify the Command of such persons by