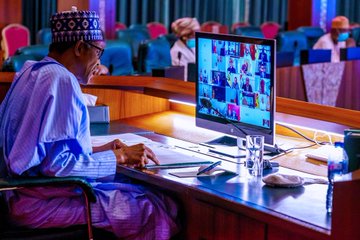 Nigeria is expecting an imminent shipment of Heavy military weapons and Aircrafts from the United States, China and Jordan to help combat insecurity.

President Muhammad Buhari told state Governors at a virtual meeting on Tuesday that Nigerian pilots and fighters are to be trained to operate the expected weapons.

President Buhari also said newly acquired naval equipment is being put to effective use in the Gulf of Guinea, even as he charged the military to get to hard-to-reach areas of Lake Chad to flush out insurgents.

He called for patience from Nigerians as the battle against insurgents enters a new phase. He also expressed satisfaction with the level of support Nigeria is getting from its neighbours.

The meeting between the President and state Governors called for a joint strategy to bring conflicts in Nigeria to an end within time limits and the need to build trust between the security agencies and communities.

Insurgency: NAF to establish Base, deploy air assets in Gombe