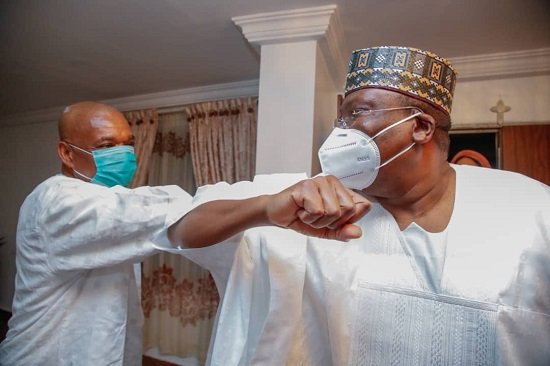 Senate President Ahmad Lawan led his colleagues to the residence of Orji Uzor Kalu, chief whip of the red chamber, on Thursday.

The visit took place one day after Kalu, a former governor of Abia, was released from prison following his conviction by a federal high court in Lagos.

He was sentenced to a maximum of 12 years imprisonment for N7.65bn fraud, among other multiple sentences ranging from 3 years to 5 years on 27 counts.

Kalu alongside Ude Jones Udeogu, a former director of finance and account of Abia state were arraigned by the Economic and Financial Crimes Commission (EFCC) on 36 counts of money laundering. they were jailed in December.

But they appealed the verdict of the court. A unanimous decision by a seven-man panel of Justices led by Justice Amina Augie, held that the Federal High Court in Lagos acted without jurisdiction when it convicted Kalu.

Related Topics:Orji Uzo Kalu
Up Next

Nassarawa to get N8.1bn for the construction of multipurpose dam from FG