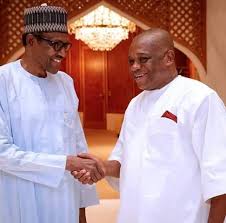 The Federal High Court in Lagos has sentenced a former Abia State Governor, Orji Uzor Kalu, to a maximum of 12 years imprisonment for N7.65bn fraud, among other multiple sentences ranging from 3 years to 5 years on 27 counts.

Justice Mohammad Idris also convicted and sentenced his two other accomplices who were also found guilty of N7.65bn fraud.

They got multiple sentences between 10 years and 3 years. Kalu’s co-defendants are his firm, Slok Nigeria Limited; and Udeh Udeogu, who was Director of Finance and Accounts at the Abia State Government House during Kalu’s tenure as governor.

The judge also ordered that Slok be wound up and its assets forfeited to the Federal Government.

Kalu has been a staunch supporter of President Muhammadu Buhari, a “close friend and father, who deserves all the support to make Nigeria better.” he had described the President.

On July 11, 2007, Kalu was arrested by the Economic and Financial Crimes Commission on charges of corruption while serving as the governor of Abia State. He was later released on bail, and accused the Obasanjo regime of persecuting him during and after his tenure in office, an accusation mentioned by former U.S. Ambassador to Nigeria John Campbell in his book, “Nigeria: Dancing on the Brink.”

Related Topics:CourtfraudOrji Uzo Kalu
Up Next