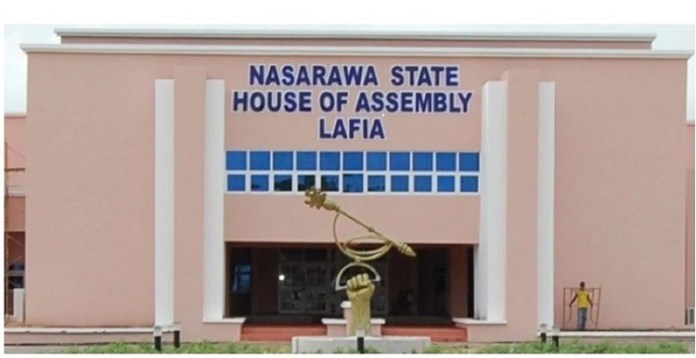 The Nasarawa State House of Assembly has requested Governor, Abdullahi Sule to sack the Secretary to the Government of the State, Alhaji Aliyu Ahmed Tijani, of his appointment for confiscating a sizable amount of money worth N284.5m when he was the Commissioner of Education in the state.

Speaker of the House Hon. Ibrahim Balarabe, made the request on Tuesday in Lafia after the house deliberated on a report of an Ad-hoc committee investigating the alleged N1 billion approved in 2018 for the fencing and renovation of Secondary schools in the state.

The action followed a motion moved by Hon Mohammed Alkali and was seconded by Hon Ibrahim Muluku in the chamber of the house.

Upon intensive deliberation on the matter, the speaker of the house asked Ahmed Tijani to refund over N248.5 million as unaccounted funds to the coffer of the state government.

According to the speaker, “based on the committee’s  recommendations,  the total sum of N873, 233,942.60 was expended based on information from the payment Voucher (PVs) excluding 5% deductions for Monitoring and Evaluation (M $ E) as payments for the completed and uncompleted  projects.

Balarabe explained that the SSG, has displayed blatant inefficiency, incompetency and ineffectiveness in the performance of his official duties and as such be dealt with.

“Based on the resolution of the House, His Excellency, Gov. Abdullahi Sule should relieve the SSG, Alhaji Aliyu Ahmed Tijani of his appointment.

“I will request the clerk to communicate the House’s resolution to His Excellency, Gov Abdullahi Sule for his immediate action,” Balarabe said.

The speaker called on Gov. Sule, to as a matter of urgency work on the House resolution in the interest of peace in the state

Ibrahim Balarabe also urged the government to declare a state of emergency on all the project sites to ensure its completion.

“Funds should be released to contractors who have the capacity and ability to carry out the work,” he said.

He also directed contractors who collected money and refused to carry out the renovation/fencing to do so within one month or face the consequences.

The speaker urged the ministry of education to take on the spot assessment of all uncompleted projects to see the level of work done and to make funds available for the completion of same in the interest of development.

It would be recalled that on March 17, 2020, the speaker had constituted an Ad-hoc committee to carry out thorough investigation on the alleged use of the N1billion approved for the renovation/ fencing of public secondary schools in the state.