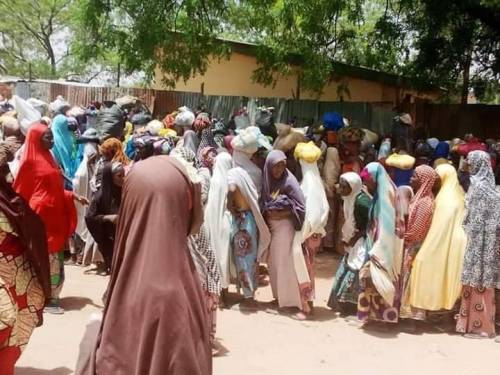 Over 600 people, mostly women and children displaced by bandits across Katsina State, are now living on a football field in ATC Katsina.

Nigeria’s President Muhammadu Buhari is also from Katsina State, the state Government continues to raise alarm over the rising crime rates across the state – last week, residents staged a protests over killings and kidnappings across the state.

SaharaReporters reports that more displaced persons are still trooping in to the open field while appeals for food assistance are being made.

Recall that last year Katsina State Government entered into a peace agreement with bandits terrorising residents of the state with an offer of amnesty.

Displaced persons, especially women and children, have been seen in recent days moving from one point to another across Katsina city begging for food.

NewsWireNGR recalls that the Katsina State Governor, Aminu Masari, had said that “COVID-19 is not an issue” for the people of the state as armed bandits continue to unleash terror and mayhem on them, unabated.

He said over 50 persons have been killed by gunmen in the last two weeks.

The governor complained few weeks ago, after receiving the Chief of Defence, Training and Operations, Maj-Gen Leo Irabor and other senior officers from the Defence Headquarters, Abuja.

Masari said, “We sincerely appreciate the efforts of the security agencies in the fight against banditry but we must also state that the situation has become so overwhelming. We are running out of words to convince our people that we are on top of the situation.

“They are, by the days, losing confidence in us as their leaders, saddled with the responsibility of securing their lives and properties.

“I am so saddened with the situation we are in now, because to most of our people in the troubled areas, COVID-19 is not even an issue. It may have taken over the world and the news about it but not here.

“Attacks by armed bandits have become a daily affair. In about two weeks, we have lost more than 50 people.

“At our own end and within the resources available, we have provided support to the security agencies. We even brokered peace through an Amnesty and reconciliatory drive. Some of the bandits repented and joined us in the fight. They were, however, overpowered by the unrepentant ones who are more sophisticated.”

The governor urged the leadership of security agencies in the country to up their ante in combatting the activities of gunmen in the state.