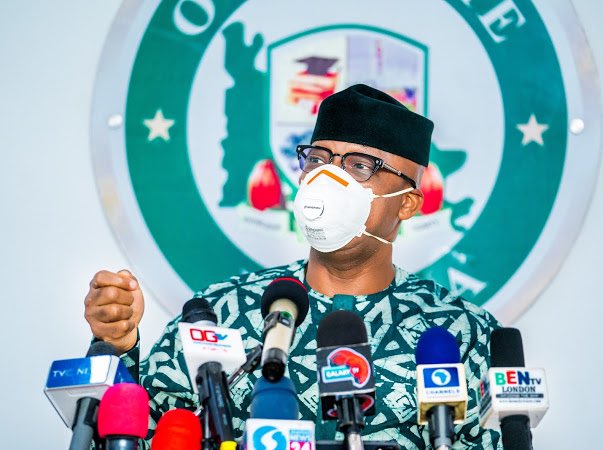 The Ogun government  says more than 8,000 health workers have been enrolled for life insurance policy in order to further motivate those working on the frontlines against COVID-19.

Dr Tomi Coker, the Commissioner for Health in the state, said this on Friday in Abeokuta while briefing members of the House of Assembly on government’s efforts to curtail the spread of the pandemic.

The News Agency of Nigeria (NAN) reports that the assembly had on Wednesday summoned the commissioner and her Special Duties counterpart to come and explain  the administration’s initiatives on checking the spread of the virus.

Coker added that government had  finalised an incentive package for the health workers.

She also said 700 contacts had been tested, out of which 137 were confirmed positive while 59 were treated and discharged.

The commissioner further said there were 70 active cases while five deaths were recorded.

Coker noted that the available facilities at the isolation centres had made response to the pandemic steady in the state.

According to her, Sagamu and Ikenne have one centre each while three are in Abeokuta,

She said the centres were established in line with international best practices in being sited close to tertiary health facilities.

The Commissioner for Special Duties , Mr  Femi Ogunbanwo, on his part, said no fewer than 60,000 school pupils currently at home would be fed within the next two weeks under the Home Grown School Feeding Programme of the Federal Government.

Ogunbanwo explained that the intervention would be carried out in collaboration with relevant stakeholders including the Parents/Teachers Association and local government councils at the 290 designated distribution centres in wards  across the state.

He added that more than 2, 400 households in the state had been enlisted in the Conditional Cash Transfer initiative of the Federal Government.

Responding, the Speaker, Mr Olakunle Oluomo,  challenged the commissioners to improve on every measure aimed at combating the spread of the virus.

Oluomo  reiterated that the Ninth Assembly would continue to collaborate with the executive in ensuring that the state flattened the curve of the pandemic.

He urged residents of the state to adhere strictly to the guidelines set by government to curtail the spread of the virus.

To continue telling under-reported stories, we need your support for the work we do, donate to  https://paystack.com/pay/newswirengr

Related Topics:Ogun State
Up Next