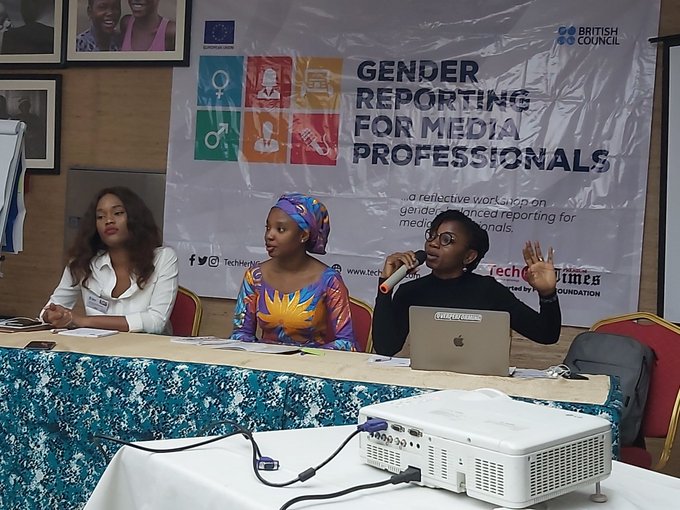 The inclusion of women in all spheres of reporting and creating space for women’s voices to be heard has to be deliberate in the newsroom. This was the backbone of the workshop on gender-balanced reporting by media professionals,organised by digital advocacy group; TechherNG; in partnership with Premium Times, The European Union, British Council and supported by the Ford Foundation.

The Gender reporting for professionals workshop looks to tackle the challenge of effectively reporting gender-based stories in Nigeria and features a rich panel of facilitators across media platforms. The panel covered areas like gender balance in the newsroom, gender sensitivity in language, social conditioning, and how to report gender based violence.

Data Journalist and Executive Director at The Interactive; Joshua Olufemi; emphasized how important it is for news editors to find the voice of women in their reports. “Stories about women should be told with a woman’s voice. Women’s sources should be interviewed and newsrooms should be deliberate by creating a female source database”

CNN multimedia journalist; Aisha Salaudeen says gender reporting is about including all voices in a balanced way. According to her; “newsrooms should consciously pay attention to women’s voices and perspectives and efforts must be made to be diverse.”

Speaking about reporting sexual violence – Media trainer and editor with the Guardian; Lolade Nwanze, said “If your story makes the victim feel bad, you haven’t done a good job.”

The reflective workshop, emphasized how media reports sometimes humanizes the perpetrator and objectifies victims. The struggle to sometimes, find balance, can be the enemy of the truth, as highlighted by participating Journalist; Nelly Kalu. If the truth cannot be magnified by telling two sides of the story, journalists should focus on the side whose voice needs to be amplified.

“Why amplify the voice of the perpetrator, when the victims needs to be heard? Follow the tilt of the truth” she said.

The workshop emphasized that to sensitively report or produce gender related content, journalists must do away with gender norms and work on their internalized bias.

Nigerian actress and producer; Dorothy Njemanze, said Journalists should be mindful of their personal bias while reporting, while noting that the gender bias shown in the media, translates to real life issues and journalists should be at the forefront of the fight towards gender equality. “At the core of your reporting, always remember that protecting the victim is key. That should be the primary objective.”  She said.

In Ekiti, Governor Kayode Fayemi returns schools back to missions