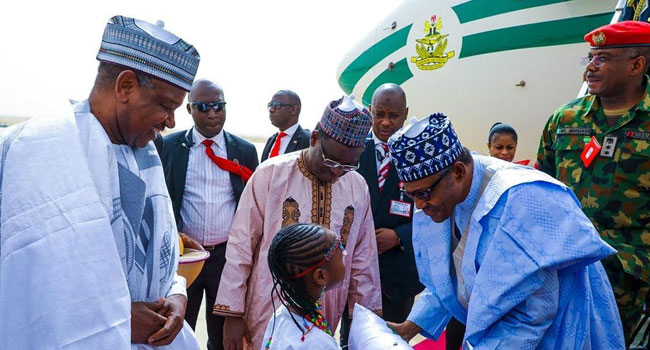 President Muhammadu Buhari has arrived in Birnin Kebbi to attend the Agricultural Fair and Display, a part of the 2020 Argungu International Fishing Festival.

The President was received at the airport by top officials of the Kebbi State Government led by Governor Abubakar Atiku Bagudu.

The Federal Government had earlier on Thursday officially flagged off the Argungu Festival in Abuja.

The President who was represented by the Minister of Information and Culture, Alhaji Lai Muhammed in Abuja said the introduction of the use of local content in this year’s festival explains the government’s priority on Made-in-Nigeria goods and products.

He added that the Federal Government is ready to harness the potentials of the automotive industry which is capable of generating billions of dollars annually to the country.

“The Federal Government will continue to give the necessary support for the Argungu Fishing and Cultural Festival and all other festivals in the country in a bid to boost tourism.

“We are committed to diversifying the economy through industrialisation and tourism,” he said.

He noted that all vehicles for the rally were locally assembled in Nigeria, which was part of efforts to boost and showcase Nigeria’s automotive industry.

In his welcome address, the Director-General, National Automotive Design and Development Council (NADDC), Jelani Aliyu said the Argungu Festival will serve as an avenue to showcase Nigeria-produced and assembled vehicles.